by Dave Anderson, author of “How to Lead by The Book: Proverbs, Parables, and Principles to Tackle Your Toughest Business Challenges“ 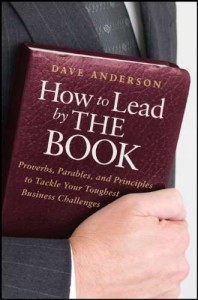 Confronting poor performers: Of all the responsibilities that come along with leadership, it’s not likely to be among your favorites, and yet, it is among the most important things you’ll do for your organization. Chances are, you approach delivering this sort of unpleasant feedback in one of two ways: You wimp out and avoid it altogether, thus sparing everyone an uncomfortable scene (but perpetuating unproductive behaviors). Or you don’t hold back at all and let people have it — those poor performers will either shape up or ship out (you hope!), and if it’s the latter, then good riddance to a weak employee who couldn’t hack it.

But there is a middle ground when it comes to confronting poor performers. And as a Christian leader, it’s your responsibility to reach it by taking a path that blends gentleness with firmness.

Demonstrating love for others — regardless of the circumstances or how much authority you may have — is something that truly pleases God. And the great news is that we already possess the perfect instruction manual for doing so in every aspect of life, including business: The Bible.

The entire Bible is filled with positive leadership examples, but when it comes to confronting poor performers, there’s someone, in particular, who stands out: Jesus. Most people tend to think of Jesus as a wise but meek teacher. What they don’t immediately realize is that He was actually quite the confronter! He lectured the Pharisees on multiple occasions, called the crowds to whom he preached on their wayward actions, and didn’t shy away from correcting His own beloved disciples.

Jesus wasn’t a pushover, but He wasn’t a bully, either. He realized that confronting others is actually a way of showing love to them. Not doing so actually demonstrates apathy and indifference to that person’s potential and welfare. Jesus also knew that when these types of interactions become necessary, they can’t be approached with the intent to punish, humiliate, or expand one’s personal power.

The Bible provides very clear examples of how to use confrontation wisely to improve individuals and to protect an organization’s future. You simply have to take advantage of it. Of course, following this model still won’t make confrontation fun for you… but it will guide you in making positive, tangible differences for your employees and your organization.

If you’d like to apply the Good Book’s advice on approaching confrontational feedback to your own organization, then read on for seven transformative tips for confronting poor performers:

Chances are, at some point you’ve been called on a mistake in a way that left you smarting. Whether you were publicly scolded in a meeting or belittled to make someone else appear more competent, you probably learned your lesson…but you also felt embarrassed, ashamed, and upset. That being the case, it probably doesn’t come as a surprise to learn that in multiple passages the Bible advocates always taking the high road when initiating confrontation. And part of that is opting to discuss matters with a poor performer in private rather than hauling her wrongdoings onto the carpet in front of her colleagues.

Our objective as leaders is to develop people, not punish them. To help a team member fulfill her potential, you might need to give her a vital ingredient she’s currently lacking, whether that’s knowledge, structure, or direction. She’ll be much more apt to take that instruction to heart if she feels valued instead of hurt and resentful. By taking the time to have a sincere, private conversation rather than tossing out criticism in front of the whole team, you’re communicating a very respectful reproof that is likely to take root and spark a sincere change.

In organizations across the globe, there’s “that guy”: the one who can do no wrong in the boss’s eyes, and who blithely flouts the rules that bind everyone else. Often, this person also happens to be a top performer. Well, he knocks it out of the park 99 percent of the time, the logic goes, so he deserves to be cut some extra slack. Not so fast, wannabe-benevolent boss! By allowing a top performer to violate values, exhibit selfishness, or break the rules without rebuke, you’re undermining your organization’s culture and your own credibility.

We know that Peter was one of Jesus’s closest, most beloved disciples. But that didn’t stop Jesus from castigating him with a harsh ‘Get behind Me, Satan!’ when Peter tried to contradict Him. Peter didn’t get a free pass just because he was in the inner circle, and neither should your top performers. All members of your team must be corrected in a timely and appropriate manner when they misstep, each and every time.

Make sure the correction fits the “crime”.

One of the marks of being a good leader is realizing that not all failures are created equally — and then responding accordingly. The fact is, while performance shortfalls are significant and must be called out, issues that stem from a toxic attitude, a lack of respect for values, or an overly inflated ego must be corrected much more forcibly. You see, knowledge insufficiencies can be easily filled, but character issues must be addressed and monitored like the deadly diseases they are.

If you look through the Bible, it’s clear that the harshest words and consequences are reserved for individuals who violated values — who knew what was right and wrong and deliberately chose the wrong path. For example, Acts 8 tells of Peter’s encounter with Simon the Sorcerer, a recent convert who had become wealthy by practicing black magic and who wanted to purchase the Holy Spirit’s power to add to his arsenal. Peter’s response was immediate and vigorous: He attacked Simon’s wickedness and ill-intentioned heart, despite the fact that Simon was a rich new member of the team. As a leader, you must customize your approach to confrontation to fit the person and the offense. Hold your leaders to a higher standard. And take a very tough stance against those who violate values, embrace selfishness, and create division.

Beware of committing a false kindness.

Some well-intentioned leaders believe that with enough positive reinforcement they’ll be able to forgo confrontational talk altogether. What these aspiring Mr. Nice Guys fail to realize is that by not confronting followers who stray, they’re actually showing a lack of caring.

Skipping tough feedback and unpleasant consequences is showing a false kindness, because this tactic just results in even more poor performances. Instead, the thing to do is to ‘shovel the piles while they’re small’ — confront bad behaviors with fairness and firmness as soon as they start. And remember — as a leader, your primary focus must be on telling the truth with love, not on whether your team likes hearing that feedback.

Just as it’s important to distinguish between “innocent” and “serious” missteps, it’s important to know when to rebuke and when to simply respond. For example, if a reliable team member who’s never late rushes in tardy one day, it would probably be ill-advised for a leader to shout out sarcastically, “Good afternoon!” A better and more productive response would be to ask — genuinely — if everything is all right. (On the other hand, tardiness from a repeat offender would merit a different response.)

In the above example, you wouldn’t be compromising core values by treating the one-time latecomer with leniency. You’re simply giving a reliable team member with an established positive track record the benefit of the doubt. There’s a good reason why Proverbs 3:30 tells us not to ‘…strive with a man without cause; if he has done you no harm.’ You don’t want to spark unnecessary negative relations!

Giving confrontational feedback and then failing to offer further instructions or encouragement is like going to the doctor for a diagnosis and then refusing to take your medication. In both cases, you can’t realistically expect positive, lasting change to take effect because you dropped the ball after taking the initial action.

Offering appropriate guidance to a team member is just as important as the initial conversation. It gives you an opportunity to reaffirm, further direct, and eventually bring closure to your prior instruction. Think about it this way: Where would we be if God didn’t continue to lead us back to the correct path again…and again…and again?

Don’t dig up the past.

Especially when you’re upset with someone, it’s tempting to take every mistake she’s ever made and throw them back in her face to underscore just how justified your anger is. When you’re confronting a team member, though, it’s crucial to count to ten, take a deep breath, or drink a glass of water in lieu of unleashing a verbal torrent, because rehashing past sins only creates bitterness and breaks trust.

When Jesus came to the disciples on the seashore following his Resurrection, he specifically asked Peter three times — the number of times Peter had denied Him — to reaffirm his love. However, Jesus did not overtly remind Peter of his denials, the most significant failures of Peter’s life. Instead, He focused on defining fresh expectations by asking Peter to tend His sheep. We can all learn from this as leaders — your aim should not be to build up a case against a person, but to help that person and her performance improve.

Ultimately, confronting poor performers will never be enjoyable. In fact, it will almost always be nerve-wracking, uncomfortable, and maybe even downright upsetting. But if you follow THE BOOK’s blueprint for confronting someone after a misstep, you’ll be able to correct behavior, show love and respect, and spark lasting, positive growth.

Dave Anderson is author of “How to Lead by The Book: Proverbs, Parables, and Principles to Tackle Your Toughest Business Challenges“, is president of Dave Anderson’s Learn to Lead, and has given over 1,000 leadership presentations in thirteen countries. He is also the author of “How to Run Your Business by THE BOOK: A Biblical Blueprint to Bless Your Business“; “If You Don’t Make Waves, You’ll Drown“; “Up Your Business!“; “How to Deal with Difficult Customers“; and the TKO business series, all from Wiley. He and his wife, Rhonda, are co-founders of The Matthew 25:35 Foundation, which helps feed, educate, and house under-resourced people throughout the world.