By Brian Tracy, Author of “Full Engagement!: Inspire, Motivate, And Bring Out the Best In Your People“ 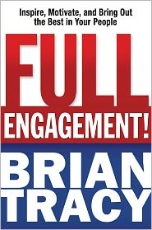 It is important that you never trust to luck when you plan a project. Hope is not a strategy. Remember the words of Napoleon, when he was asked if he believed in luck. He said, “Yes, I believe in luck. I believe in bad luck. And I believe that I will always have it, so I plan accordingly.”

There are four main problems in project management. Each of them can be avoided by taking the time to think carefully before embarking on a new project.

The first is not allowing enough time to complete a multi-task job. This is the primary reason why projects fail and people’s careers get sidetracked or torpedoed. They hope for the best, trust to luck and don’t allow a sufficient cushion of time to complete every step of the project. As a result, the project fails.

The third problem in project management is when the project team ends up rushing at the end. When you rush to complete a project, because you have run out of time or money, you almost invariably make mistakes and do poor quality work that you have to go back and correct later. It actually takes less time to finish a project correctly if you work at it slowly and steadily and do it properly in the first place.

4. Trying to Do Several Things at Once.

The fourth problem in project management is trying to do several things at once, and you ending up doing nothing well. You either take on too much at a time, including too many responsibilities yourself, or you assign too many responsibilities to other people. In either case, various parts of the project fall through the cracks and sometimes all the effort is lost. Do things one at a time, and do each thing well before moving to the next task.

How to Avoid These Problems

One of the most powerful methods for designing and project managing is called “Storyboarding.” It was originally developed by the Walt Disney Corporation to plan cartoons and movies and was eventually used in every part of the business.

On a storyboard, you create a visual image of the project, mounted on the wall, so that everyone can see it and comment on it. You begin with a large corkboard. You then get boxes of pins or thumbtacks and stacks of 3 x 5 and 5 x 8 index cards. Get several felt pens with different colors. You are then ready to begin.

Across the top of the storyboard, write the major parts of the project plan in one or two words, on 5 x 8 index cards, with the colored felt pens. These are very much like the titles of the chapters of a book, and are called “headers.” You may have anywhere from three to 10 different headers as the main parts of the project.

Under each of the headers, you place 3 x 5 index cards. You list an individual step in the completion of the task on each of the 3 x 5 cards.

When you are finished, you will have created a visual representation of the entire project, showing what needs to be done, and in what order. You can then write the name of the person who is responsible for each of the jobs on the card listing the job.

You can also use storyboarding with a sheet of paper. You can write a series of larger boxes across the top and then write a series of steps in each of those tasks in boxes underneath. The more visual you can make the project and the project plan; the easier it is for you to see relationships between the various tasks, and to make whatever changes are necessary to assure that you complete the project on time.

Brian Tracy, author of “Full Engagement!: Inspire, Motivate, And Bring Out the Best In Your People“, is one of the top business speakers and authorities in the world today. He has spoken in almost every city in the US and Canada, and in 58 other countries. He has written 50 books and produced more than 500 audio and video learning programs on management, motivation, and personal success. He is the president of Brian Tracy International as well as Business Growth Strategies, which is the preeminent Internet business learning portal in the world today.