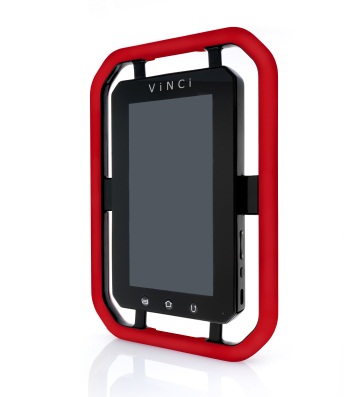 If you haven’t noticed by now, tablet devices are all the rage this year. But here’s one tablet that probably escaped your notice – like many in its class, VINCI is an Android-based mobile touchscreen device that is a full-featured computer. Unlike the rest, however, it is specifically designed for young children.

The lightweight device, which has a protective silicon handle for kids to hold, is positioned as a child-friendly interactive learning platform. It comes with custom-designed software, music videos and animated games that are adapted to the needs of young children – from toddlers up to five years of age – to help develop their cognitive, education, emotional and social needs.

VINCI is invented by Dr. Dan Yang, CEO of Santa Monica, California-headquartered Rullingnet Corp. Dr Yang, an entrepreneur in the telecommunications industry, was fascinated by the fact that her young daughter Hera eschewed normal toys but enjoyed interacting with mobile technology including phones and laptops. As a mother herself, she realized that current technological products did not properly address the needs of very young children, and so set about creating a company to design  the first child-friendly interactive learning devices for young children.

“It is a well-known fact that the first three years of a person’s life is the most critical period during which a character and an attitude will be initially formed, and, like every parent, I want to provide my child with fun tools that will help her build a positive attitude toward learning while developing essential skills necessary for the modern world,” says “mompreneur” Yang, who have filed various patents for VINCI and which should be available commercially sometime later this year.