Located on the outskirts of Singapore’s central business district, the Duxton Hill area of Tanjong Pagar was once regarded as sleazy and even dangerous. Its streets were overrun by vice and many drunken fights due to the many bars and pubs there, until police raids cleaned it up in the past couple of years.

Today, the area is seeing change. Its relative quiet and proximity to the financial district has led to many new local businesses setting up shop there, including various patisseries, art galleries, cafes and even digital, marketing and communications consultancies such as Vocanic and Rice Communications. One of the latest businesses to set up there? The Pigeonhole Cafe, a laid-back and quirky chill-out spot started by a young Singaporean couple, opened some weeks back.

“It’s not easy to define what we are,” admits co-owner Rayner Lim, 32. Rayner, and girlfriend Ave Chan, 26, essentially put The Pigeonhole Cafe together based on what both liked – books and art, a good drink, desire to support social causes, chilling out in the comfort of home, that sort of thing. The cafe certainly reflects that – its eclectic pieces of furniture, bookshelves with over 200 out-of-print, vintage books (sourced from Thailand and India), along with good coffee and a range of really excellent beers and whiskey, tell of their taste. Albeit in a mad genius sort of way.

“We didn’t conduct much market research, or how to ourselves set apart (from the competition),” admits Rayner, with a shrug. 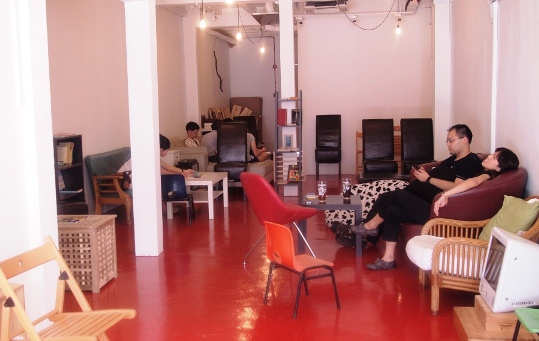 The former film editor late last year had decided to quit his job (after six years), and one day sat down at home with Ave – they’ve been dating slightly less than a year – to discuss options. “I didn’t like my job,” he mused. “I wanted to open a bookshop.” Ave, who was a lawyer at that time, also decided that she had enough. They put together and worked on a plan for their dream business, culminating in The Pigeonhole Cafe.

They’d come up with the name because Rayner liked those classic China-made Flying Pigeon bicycles – he’d wanted to put one in front of the cafe. The name’s also rather apt – it’s small and cosy, and reflects the couple building their own nest, of sorts. If everything goes well, Rayner says they want to keep The Pigeonhole Cafe as it is, and open a second cafe. “I’d call it The Thieving Magpie,” he laughs. Just to keep in line with the bird reference, of course.

Rayner and Ave know that they won’t pay the rent selling books. Selling coffee and alcohol helps, but the owners know they need to ensure a steady stream of customers coming through the door, especially since sleepy Duxton gets deserted during the weekends. “We cannot (just) wait for people to come in and drink,” Rayner admits. That’s why they plan and collaborate on events at their venue to sustain a crowd – art exhibitions, bi-weekly flea markets, as well as various fund-raising activities with non-profit and social organizations such as the Nature Society and the Society for the Prevention of Cruelty to Animals (SPCA). They recently hosted MusicCamp SG, and will also play host to the upcoming SuperHappyDevHouse Singapore on May 14, a geek-fest that will see developers and programmers get together and collaborate on projects.

The conservation shophouse that The Pigeonhole Cafe occupies – it used to be a tanning solarium that Rayner says was frequented by the gay community – wasn’t their first choice. But they chanced by this location – it had good frontage and decent rent, as well as a nice landlord – and decided on it. They initially wanted a space in Little India, but contract negotiations fell through. Places like Haji Lane weren’t viable options either. “The rents there are through the roof,” Rayner says. “It’s also hard to compete against the incumbents.” 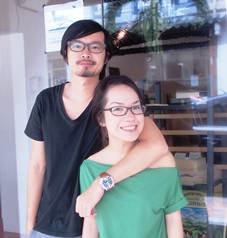 There Is No Backup Plan

The two have invested their entire life savings into The Pigeonhole Cafe – a bold step considering they’ve only been dating for such a short time. What if things don’t work out? Rayner says the thought has crossed their minds. “There are really three options,” he says in all seriousness, “either she buys me out, I buy her out, or we continue to run this place like mature adults.”

But he says thinking too much about the what-ifs can get in the way of pursuing their dreams. “People are always afraid of doing things. If you keep thinking of what doesn’t work, then you’ll trapped forever doing nothing. Dive with both feet and do it,” he advises.

“There is no backup plan, because it will work.”

You can find The Pigeonhole Cafe at 52/53 Duxton Road, Singapore. (map)