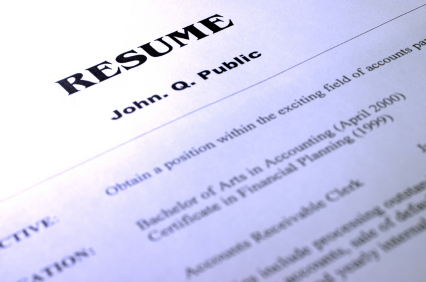 The resume is a powerful document. It’s been around for decades, and it shows little sign of disappearing any day soon. It’s usually a candidate’s first means of creating an impression with a desired organization, and many companies rely heavily upon it to create a picture of the candidates that apply to them.

Candidates go to great lengths to craft a resume that stands out, extorts their virtues, and seems to position them perfectly for the position they seek. Additionally, there are books, Internet sites, and consultants that focus on helping candidates craft just the right tone, content, and format.

In turn, companies quickly screen out those candidates whose resumes don’t show the right stuff. Then, they often look even harder at the remaining resumes to see if the candidates have already accomplished a similar position or if the details of the resume point to a fatal flaw.

You can see that a lot of calories are burned up in these activities by candidates as well as companies, all of whom take this document seriously. This would be fine, actually, if the resume were an accurate predictor for how well the candidate will perform in the position you seek to fill. Too often, however, that is not the case.

This is especially true when we consider the role of natural abilities, which are critical to high performance.  While we all can acquire skills, knowledge, and experience, we acquired our natural abilities at birth or very early in life.  We all have a sense of what they are, but oftentimes we ignore the role that they play in our success.

Now, don’t get us wrong – we think that the resume can be a useful starting point for understanding a candidate’s history and accomplishments (assuming the resume is truthful). We just want to caution you against taking it at face value – you need to look beyond the resume and discover for yourself the candidate’s natural abilities that might or might not allow her to be successful in the position you are filling.

We worked at a company that had recently hired a new President. He had a resume that shined. It described how he had accomplished almost everything desirable for someone seeking the President position, and he was hired.

It wasn’t long, however, before his actual capabilities indicated that he was not the person for the position. He was running the company into the ground and quickly alienating a highly capable staff.

The CEO of the company asked his top managers for an evaluation of the President. He was concerned, and rightly so, about allowing this individual to continue in the position.

Although the CEO received a relatively consistent story about the President’s lack of competence, one of the Vice Presidents had a different notion. “Well, I agree that he’s not doing a good job right now, but he must be qualified”, said the manager, “after all, he held a similar position in his former company”.

So there it was. Despite direct observations that the President wasn’t doing the job, a top manager of the company concluded that the President must be qualified since he previously held a similar position. This manager was so impressed with the President’s resume that he couldn’t interpret the data right in front of him.

So this must be a unique situation, right? No one else would come to such conclusions, would they?

If only that were true. This kind of thinking just takes different forms. The resume influences our thoughts and conclusions so strongly that sometimes it is difficult for people to be as skeptical as they should. Using the resume as their guide, they sometimes hire the person they imagine – the person that they want to believe can accomplish the position successfully.

One of our clients was a prominent wholesale distributor of goods sold in retail stores. To better support their daily operations, they had developed a software program that greatly assisted them as well as their clients. Now they wanted to commercialize the software itself, something that clearly was outside their core expertise.

They began a search for someone to lead this new effort. They needed someone who could understand the target markets for the product, continue to develop the product to serve those markets, and then deliver a quality product to the customers.

The development effort itself was being undertaken by several current employees. It was a group of less than 10, and the atmosphere was common to many entrepreneurial ventures – everyone pitched in to do whatever was needed. This was the culture that would greet the new manager.

The CEO and CFO obtained a resume of a fellow from out of state that they wanted to meet. In fact, they loved his resume. He was from a nationally recognized company, he held a modest though important-sounding title, and his resume outlined a long list of accomplishments at his current company.

The two executives flew the candidate in for a lunch time interview. They were already convinced that they would be fortunate to land someone from this high-profile company to lead their software development effort. Now they had a chance to confirm their impressions.

Throughout the entire interview, the executives described their company, the software product and its development, and their needs for a new manager. They described the history of the company, the company benefits, and the advantages of working and living in their city.

They never asked the candidate a single question. They were salesmen on a mission – to convince this obviously qualified candidate to join their company.

He did. And he didn’t work out.

There is one more issue related to the resume that you should consider: truthfulness. We suspect that people have embellished their resumes since the first one was written, but you want to be sure that you hire someone that is truthful (their words match the facts). You and your team will be working with this person, and you need to know that he can be trusted.

We caution you against believing that a lie on the resume is acceptable – that the person will be truthful to you in his new position, although he lied to get that position. We think this is delusional and that this untruthfulness is a key issue of principles. You can’t afford it.

We once interviewed a candidate for a senior sales position in a company that offered laboratory and industrial hygiene services. This position required a high level of technical skill, an ability to establish a good relationship with a client quickly, and careful attention to follow through to ensure that the client’s needs were met. This was not an easy position to fill.

We interviewed a candidate whose resume was terrific. He had great experience at a similar company, presented himself very well, and was very knowledgeable about the industry and the services he would offer. He was perfect. We recommended hiring him, pending a background check.

Oops. It turned out that he didn’t really have that college degree that was listed on his resume. Why not? Well, he said, he thought the resume would look better with that degree on it. He was sorry.

So were we. How could we ever trust this guy? What would be next? Would he lie about his expense report, or what the client really said to him, or who knows what?

We couldn’t hire this candidate. And the degree actually meant nothing to us. We just wanted someone who could excel at the job. But we also wanted someone we could trust.

However, even if it turns out that everything on the resume is true, remember the caveat tagged onto major financial offerings: “Past performance is no guarantee of future results”. Your environment is different than the candidate’s current environment, and those differences may be significant.

That’s why understanding the candidate’s underlying natural abilities is so important. You need to know if they have the tools to survive and excel in your environment.

John Cioffi is the author of 6 Habits of Highly Successful Managers. He received his first business education in his family’s restaurant and lodging business. He later held executive positions in several companies, ranging from start-ups to a Fortune 100. He has been a business coach for more than 15 years, is a frequent business speaker, and is a partner in GoalMakers Management Consultants. He received a BA from Colby College, a master’s degree from Dartmouth, and an MBA from Wharton.