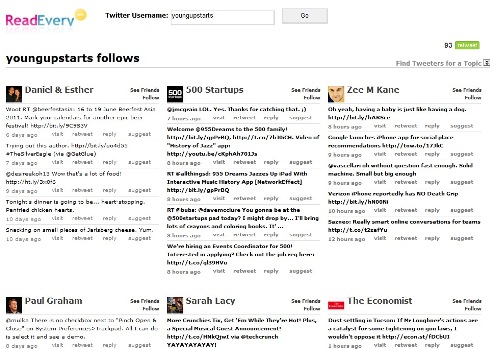 ReadEvery (www.ReadyEvery.com) is an interesting way to, well, read Twitter. Developed by Delhi, India-based Girish Lakshminarayana, ReadEvery lets you follow tweets from all the people you follow at one glance on a single page and is a good way of finding interesting Twitter users that your immediate follow circle is following.

“I thought that Twitter‘s timeline is too fast for me and I miss a lot of tweets because they have gone by already,” explains Girish, who works as technology consultant and director at Klea Global. “I also find that we need more ways of finding interesting tweeters!” Girish admits he developed the service for fun and “wasn’t sure if people would like it”. “Now it seems from the feedback that they do find it useful and maybe it is a need some of them always felt,” Girish says. “I asked fellow entrepreneurs in one of the online forums I am active in and received a lot of encouragement and feedback.”

A college dropout who pretty much started as a technology entrepreneur, Girish co-founded InstaColl.com – funded by Hotmail co-founder Sabeer Bhatia – which unfortunately imploded during the dot com bubble bust in 2000. Following a stint at the Times of India, he finally decided to pursue his own entrepreneurial adventure and five months ago started Klea Global with two other partners. The company provides technology solutions to the public relations and communications industry, and currently has offices in London and Delhi.

Girish describes himself as having “a penchant for research and coming up with new ideas”. “I also had many ideas that I wanted to implement as a programmer and I decided do execute them in my spare time,” he elaborates. He must have quite a bit of spare time, as some of the ideas that came to fruition include power search tool TrackThisNow.com, daily deals aggregation site DealzFull.com, JobsPirate.com, a tool to help users find jobs across geographical locations, as well as WebToIM.com, a service that tries to bring web services to instant messenging services.

Indeed, Girish is fascinated by the new business models that are coming about by the transition of the Internet, and runs a news portal which documents this transition at Web 3.0 Journal. He finds Twitter amazing in that it became a platform for engaging normal people who wouldn’t otherwise creat content on the Internet, and thinks that the concept of “following someone” a reflection of humanity’s social nature.

“Thats why Twitter is so big with celebrities,” he surmises. “A tweet by itself might not mean much but if you for a moment assume everyone in the world is documenting what is happening around them then you suddenly have the world’s biggest news source.”