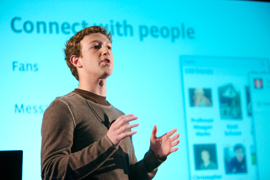 Facebook Founder and CEO, Mark Zuckerberg, together with 16 other America’s richest people have pledged to give away a huge proportion of their wealth.

Giving Pledge is an effort led by Microsoft founder Bill Gates and investor Warren Buffett to commit the country’s wealthiest people to step up their charitable donations. The Pledge has so far signed up 57 contributors, who include New York Mayor Michael Bloomberg, CNN founder Ted Turner and film director George Lucas.

Though not a formal contract, those who pledge are committing to give away at least half of their wealth to philanthropic causes either before or after they die.

This isn’t the first time the Facebook head has donated for good cause. Prior to this, Zuckerberg launched the Startup: Education, a US$100 million foundation dedicated to improving education in Newark, New Jersey and the rest of the U.S. The ultimate aim of the education foundation is to create a model for rewarding excellence in education on a national level.

The donation was made just before the movie, The Social Network launches. The Social Network chronicles the formative days of Facebook, from its founding in Mark Zuckerberg’s Harvard dorm room through its early rise to success. The way Zuckerberg was played in the movie painted a negative image in many people’s mind. At that time, some argued that the education foundation was simply a PR gimmick to provide an “image cushion” for the Facebook CEO.

This time round, there is probably less debate on Zuckerberg’s intention. Giving away at least half of his wealth is a price too heavy to pay for any PR gimmick. (That’s more than $3 billion folks.)

Kudos Zuckberg, you have become the role model for the young generation. At least on your generosity to donate for good causes.

This article was first posted on Penn-Olson, a tech, marketing and marketing blog focusin on US and Asia. Penn-Olson is a Young Upstarts content partner.

Interested In A Music Industry Career? Be Prepared To Pay Your Dues