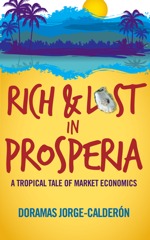 For young entrepreneurs, starting up a business can be intimidating. But even before developing and perfecting your product and drafting a solid business plan, you need to understand the principles and workings of market economics. And in today’s unstable economy, the power of a strong education in economics is even more pertinent to financial and business success. So what are some of the basic principles of capitalist and market economics that every entrepreneur should know?

1. Why bother with markets? Why not explain capital instead? That’s what we need to get rich! And, after all, capitalism is about capital, right? Yes, capitalist economies become richer by accumulating capital. But so do communist economies, and hence it is not legitimate to attribute capital to capitalism. It all rests on a misunderstanding of what capital really is, with the popular view that capital is money. Consider this, if you are alone in an island without the ability to transact with anyone, what would you rather have: a pile of money or tools to grow fruits, canes and nests to fish, seeds to grow vegetables, and knifes and traps to hunt? Unless you eat paper, you would probably rather have the tools than the money. That reveals which of the two really is capital. Capital is anything that allows you to produce something useful. Communist economies also produce capital, just as capitalist economies do. What distinguishes capitalist economies are markets, so markets are what you really need to understand in order to grasp how our economy works. As for money, although we tend to associate capital with money, money is not capital in itself. Rather, it is a means for exchanging goods and services, including capital goods.

2. Ok fine, but money is central to everything because it measures how much things cost. It sets prices, and everything has a price, so money must be key to capitalism! Yes, money measures prices, but if you view prices narrowly, measuring things in terms of money, you are missing a lot of what prices are really telling you. Prices measure scarcity, and in so doing, they convey quite a bit of information. If the price of something increases, that is a result of the item becoming more scarce, and the higher price invites everyone to produce more of that good. If the price goes down, the good is becoming more abundant, and the falling price indicates that we can have more of it. However, before you make your move to produce or consume, check out if prices are controlled by someone or are subject to subsidies, as these two things are frequently the source of future surprises!

3. But wait a minute. You’re telling me that capitalism is not about capital or money? You seem to be forgetting that money makes the world go round. It’s what makes people move! Communist countries use money as well you know? As far as economic incentives are concerned, private property rights, not money, are what really motivate people. Your money is valuable to the extent that it can be exchanged for goods and services that you can use as you like. If there are severe limits to how you can use, accumulate or transact your property, its value diminishes. If taxes or expropriation are capricious or if the legal system does not protect you, where is your incentive to “move”? Besides, many people also enjoy their jobs, and people are free to seek opportunities that fulfil them. All in all, it is no coincidence that poor countries tend to be characterized by lack of choice and poor protection of all kinds of rights.

4. Ok, sure. I kind of assume all that holds, at least in rich countries. But still, the most treasured economic possession is capital, or the money that buys you capital, right? To some extent, yes. But more fundamental is a good reputation, the trust of others. In a subsistence economy people consume what they produce, without a need to transact. But in a market economy, people produce to transact with others, and when we produce, we buy inputs and components from others. That is, in a market economy people produce to transact and transact to produce. And who do people transact with? With people or organizations they trust. No one wants to buy from, sell to, or deal with someone whom you suspect will trick or scam you. Businesspeople know that trust can be your most powerful selling point and that once trust is gone, all is gone.

5. Well, listen, all those softy things sound great, but at the end of the day in a capitalist economy, whoever is richest wins. Wrong. The theory that explains capitalism assumes that you are pretty much master of your life and that the choices you make reflect what you value or what makes you happy. You will work to the extent that you need or value the extra effort more than the activities that would fill your time if not working. If you value your hobbies, family or friends very highly, you will be happiest working less hard and devoting more time to them. After all, what’s more important, being rich or being happy? Both, you may say. Then make sure you enjoy your work, or even better, that you love how you make a living!

6. Ok, last question, but why is greed good, then? Greed is not good. Greed is wanting more for the sake of having more, and as far as the workings of the economy is concerned, it is largely irrelevant. Look around you. Would you describe most people around you as greedy? Perhaps a few (especially if you work in Wall Street!). Some may be egotistic, but most are just decent, generous people. Capitalist, market economies do not require greed or assume that you are greedy. Rather, they rest on the assumption that you pursue your self-interest, meaning two things. First, as a consumer, you will buy from the market what you want, affecting prices and sending a message to producers about what should be produced. Second, as a producer, you will only produce what makes you a profit, which in a market environment means that you’ve produced what people want and that they deem the transformation you’ve done to resources valuable. Note that either way, whether as a consumer or a producer, you will always be dealing with markets. Markets, not capital, are the basic mechanism that describes how capitalism works, and self-interest, not greed, is what moves them.

Doramas Jorge-Calderon is the author of “Rich and Lost in Prosperia: A Tropical Tale of Market Economics”. He holds a master’s degree and doctorate in economics from the University of Leeds in the United Kingdom and has 15 years of experience as a practicing economist.