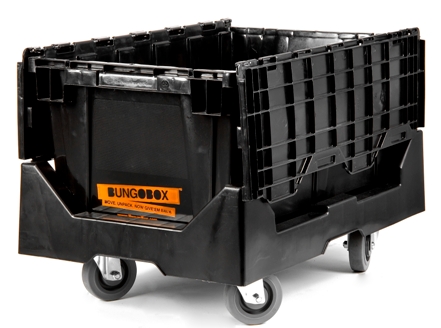 Here’s one of the moving industry’s dirty little secrets: of the materials used by Americans for moving purposes – such as cardboard boxes, bubble wrap, Styrofoam peanuts and tape – most of it is discarded, with half of that being recycled. Considering the fact that the average American moves more than 16 times in a lifetime, that’s a lot of waste that goes into landfills or incineration plants. Environmentally friendly, this is not.

Florida-based company BungoBox (www.BungoBox.com) plans to change that. The company is in the business of renting out BungoBoxes – durable, stackable, supposedly sustainable plastic containers that purportedly cuts the cost of packing supplies in half. It’s somewhat ironic – eschewing recyclable cardboard for plastic – but BungoBox founders Tom Cannon, 38, and Bob Cannon, 42, are certain it has massive advantages over the traditional cardboard boxes.

Essentially, customers rent BungoBoxes and other moving equipment from the company, which are then delivered to their doorstep prior to their move. Once a customer completes their move, the company will drop by their new address to pick up the rented BungoBoxes. “BungoBoxes do not need packing tape, come with removable contents labels, security features to prevent tampering; they are stackable and crush proof,” says co-founder Tom Cannon. “BungoBoxes have custom fitted dollies that allow for easy movement and alleviates most of the lifting typically involved with moving.” It’s definitely a far cry from the traditional corrugated cardboard box, which was founded by printer and paper maker Robert Gair in the 1890s.

Thinking Out Of The Box

Tom Cannon, who served four years in the US Navy and was involved in the first Gulf War, has a background in distribution and worked – over 20 years – with many large companies that utilize distribution centers. He came across such boxes when he was walking through one such distribution center, which was used to pack and distribute products from hundreds of companies to local retail stores. At that time, he had a friend who was moving – he was recruited to help out – and it hit on him that it would be rather cool and far easier to use such boxes instead of cardboard ones.

“So I began to look into what it would take to get a hold of some of the boxes,” recalls Tom. “What I found is that there are a couple of very small companies already providing moving box rental on local level, out west. As I researched and learned more, I thought that this concept could be huge and revolutionary on a scale that had national and international implications.”

Tom soon shared this idea with his cousin Bob Cannon, a commercial real estate investor and broker, who was immediately blown away by the idea. “We recognized a great opportunity to become the national brand that defined this new space,” Tom says.

It also helps that they feel they are doing something about the environment. With one BungoBox having the ability to replace a minimum of 250 average cardboard boxes during its lifetime, it’s not surprising they have been awarded the Central Florida Eco Effort Award.

BungoBox recently officially launched their franchise system (they became eligible to sell franchises at the beginning of August last year), and already they have over 100 applicants from all over the country. Tom predicts they should have at least three to five franchises open in 2011.

“We built BungoBox from Day One to be a franchise,” Tom explains. “Every decision we have made is to benefit the franchise system and the eventual franchisees. We think that with BungoBox we have a unique opportunity to build a franchise system that is a true interconnected network of locations. This will allow our customers over time the ability to move just about anywhere and utilize the BungoBox system.”

“This, in our opinion, is the fastest most efficient method for us to grow,” he adds. They’ve also received interest from overseas, and while they are not currently focusing on other markets, they are willing to evaluate opportunities as they come.

But it hasn’t been all smooth sailing. One of the key challenges, Tom admits, has been awareness, especially at the residential level. “This type of alternative is just not on the radar yet, people are not looking for it and people have a hard time finding what they are not looking for,” he says. Once consumers become aware, says Tom, they almost always close the sale and clients tend to become raving fans who then help with word-of-mouth.

BungoBox is currently self-funded, and their pilot location is self-sustaining at this point. Any additional money will go towards the franchise system, says Tom. “We are talking to a handful of interested individuals about infusing additional capital into the franchise arm of the company; these individuals offer not only money but strategic partnerships in many areas we are targeting.”

Entrepreneurship Is In Their Blood

Both Tom and Bob come from deep-seeded entrepreneurial roots – their grandfather has always owned his own businesses, and their fathers as well. “(We simply) know no other way of life,” says Tom. “In this case we were looking for a business that was revolutionary with big implications, one that was timely yet simple and easy to understand. This fit our goals perfectly and we absolutely love what we are doing.”

They’ve learnt a few lessons along the way, too. “Whatever amount of effort and money one thinks it will take succeed, it will take much more than you can imagine,” Tom muses. “Additionally, most of those you choose to work with will not have the ability to match your efforts and the relentless pursuit of the vision. In other words, very few of those that begin the race with you, will actually cross the finish line with you.”

But these lessons haven’t dampened their spirits. “We are having a tremendous amount of fun while working harder than we ever have.”