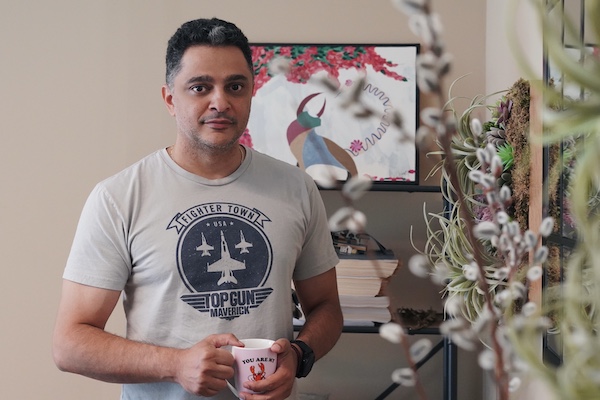 Bardya Ziaian is president and CEO of SITTU Group Inc., a global think tank focused on creating opportunities from current economic macro environments. The former President & CEO of Pario Technologies Corp. and founder of BBS Securities Inc. as well as Virtual Brokers (ranked the “Best Online Broker in Canada ” by the Globe and Mail) has an impressive 20 years of experience in the fintech world.

However, he recently embraced his life-long passion and became a film producer and actor by launching his film company, Bardya Pictures Ltd.

We spoke to Bardya Ziaian on his entrepreneurial journey in film.

Tell us about your background and how you got started in this line of work.

Bardya Ziaian: My entire adult life, my career and working life has been centered around finance. I’ve built businesses, managed hundreds of millions of dollars and found success. Despite what some may think, there is a certain level of creativity that is demanded in business and finance, particularly with entrepreneurship. I felt this other side of me, the far more artistic aspects of myself were untapped and I have aged, I have realized that to not embrace that would ultimately equal something lacking in my life. So, I made the decision, prior to the pandemic, that I would learn scriptwriting, assemble an amazing team, and make a bold move into the film industry.

Films have always inspired me. From the first time I stepped foot into a movie theater. They bring laughter and wisdom; remind us to treasure moments with loved ones and to value our time on this planet. I wanted to be a part of that magic.

Tell us about your current company, Bardya Pictures Ltd.

Bardya Ziaian: Well, we started writing and pre-production of our first film Super Dicks just before the pandemic hit. The process went along the lines of generating the idea, writing the script, securing the funding, finding the talent and then producing the film.  Now, a lot goes into each of those steps, which were particularly onerous since neither myself nor many members of my team had connections to the film industry and were unaware of the standard operating procedures. Still, I wanted us to all learn together. That was a primary goal, because teams that learn together function better long-term.

We finished production of Super Dicks, which is a comedy combined with cultural undertones. Now, everyone knows comedies can run the gamut from slapstick to sophisticated, this one is witty and thought-provoking.

We were able to bring some incredible talent onboard after we solidified much of the pre-production. Lead actors Paul Braunstein, Michael Man, Jennifer Hui, Greg Bryk (of Saw V), and Keara Graves (from the Netflix series Grand Army) brought years of experience to the film.

We recently launched production of another comedy tentatively titled, “Golden Boy” that will be directed and executively produced by Damian Lee, a veteran in the film industry. We are not revealing too many details about this latest project, except that we are all excited and the cast is phenomenal.

What inspired you to become an entrepreneur and build your business?

Bardya Ziaian: When you take a long look at the film industry, what is  one of the greatest challenges? Financing. Bringing productions out of the red is something of which even major film companies struggle. With a background in finance and a driving desire to embrace my creativity, it just seemed natural and right that I would venture into this industry. Was it technically a leap of faith; a risk? Absolutely, but often some of the greatest gifts in life come from when we believe in ourselves and in what we can create with others.

What does your business do? What problem are you solving? What is the biggest setback or challenge you have had to face? How did you overcome it?

Bardya Ziaian: I like to think we are bringing much-needed levity to people, while also bringing a message of cultural acceptance and the embracing of our differences. The entire goal of my company is to enhance people’s lives through laughter and effective communication. Amazing things happen when people connect through shared laughter.

Our greatest challenge was starting a business while the pandemic was in full swing. We followed all guidelines to keep our people safe while also navigating production. It was challenging, to say the least.

I believe the company was able to overcome the setbacks simply because the team I assembled has an innovative mindset. When there are roadblocks, we don’t stop in defeat, we immediately begin finding solutions.

What do you think the next five years will bring?

Bardya Ziaian: Greater innovation within the film industry that will make it more affordable. I think that will mean greater creativity overall and will open it up to more people, since it will no longer be as cost-prohibitive. Also, the likelihood of making a profit from film will be increased since the cost of production will decrease.

To close, what piece of advice would you give to other entrepreneurs or people looking to follow your path?

Bardya Ziaian: I think you absolutely have to follow your passion, wherever it leads. Sometimes that will mean taking risks, but what life is worth living without a few calculated risks along the way?