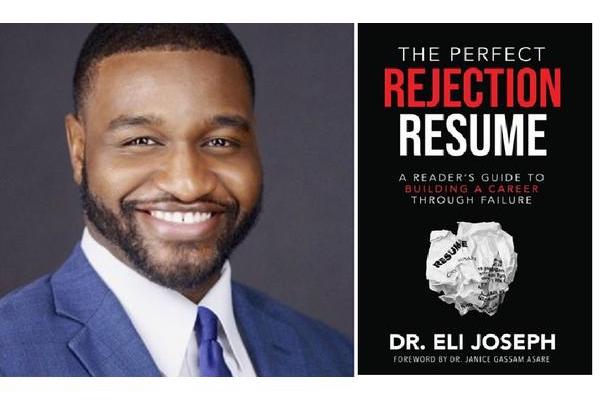 If there’s one thing young entrepreneurs know, it’s failure. We’re no stranger to closed doors, professional snubs, and inboxes teeming with rejections. Yet these experiences can teach us far more than success can, says Dr. Eli Joseph. Those dreaded rejections? It’s time to embrace them.

We recently sat down with Dr. Joseph to talk about the power of rejection, the topic of his new book, “The Perfect Rejection Resume: A Reader’s Guide to Building a Career Through Failure“.

Here is some of our conversation.

To outside observers, your career is the very definition of success. But you say the opposite: that it was built from failure. Tell us more.

Over the years, naysayers have argued that I must have been spoon-fed my success or that I’ve never experienced adversity. Oftentimes, I hear people say things like “he must have had it easy growing up” or “he never had to struggle in his life.”

But ever since I can remember, I’ve always “failed forward.” The difference is that I continued to learn from my mistakes in the hopes of improving my career.

Here’s an example: Back in the fall of 2014, I failed two undergraduate courses, and I was forced to take 10 courses (30 credits) the following semester to avoid academic probation. That failure prompted me to tackle a course load that most said I was crazy to even attempt. Yet this failure revealed how much I could accomplish.

My book is designed to let people know that there’s nothing perfect about failing. However, failing cultivates a perfect story as you make your way down the path to success.

In your book, you encourage readers to adopt this mindset by crafting a “rejection resume.” What does this type of resume include?

A traditional resume highlights your background, skills, and career accomplishments. In contrast, a rejection resume counterintuitively features the opposite: the failures, rejections, and losses you’ve accumulated over your career.

Your rejection resume should also highlight the organizations that have said “no,” demoted, or terminated you. Instead of touting your honors and awards, list the scholarships and fellowships you’ve lost and social groups that have passed you over.

When you’re finished, this document will reveal something surprising: a roadmap of what you like and don’t like, what you’re great at and need to improve, and which challenges excite and deter you.

You say that embracing failure is even more critical for entrepreneurs. Why is that?

I’m a firm believer that every entrepreneur needs to embrace failure as a starting point to success.

At our lowest points, we’re left with one question: “How far am I willing to go to get what I want or need?” Time isn’t on an entrepreneur’s side; it’s our biggest competitor. We have no time to relax. But entrepreneurs can use every loss as a reason to run back to the drawing board and quickly gain new momentum.

If we develop the habit of embracing and revealing our failures, we lose the fear of failing — publicly and privately. A track record of failure builds entrepreneurs’ character, making them fearless and mentally strong. It also eradicates pride. When you cast your pride aside, you can get real with yourself and your goals.

What myths about rejection and failure do we still believe?

We tend to believe that failures are meant to be private and personal. We’re afraid to fail, so when we do, we tend to shut down. People are uncomfortable sharing these types of negative experiences. They’re told to sweep negativity under the rug and instead focus on the positive.

We’re conditioned to view rejection and failure like a graveyard site, where we bury the outcomes of our hard work and leave them alone for eternity. We’re wired to avoid failure like the plague because we think it’s final and irreversible. It’s not.

A rejection resume will remind you of how far you’ve come while also providing a compass for your future.

What’s the one piece of advice you hope readers take from your book?

World records exist for a reason. They exist because the people who break records thought it was possible to accomplish such feats, despite the numerous failures that preceded their success.

Successful people will undoubtedly struggle to accomplish the unthinkable. We’re constantly paying rent toward our success, and it’s due every day. The currency is our efforts.

I hope readers use their rejection resumes to acknowledge their past and then focus on tomorrow.

To learn more about Dr. Joseph and his new book, visit his website.