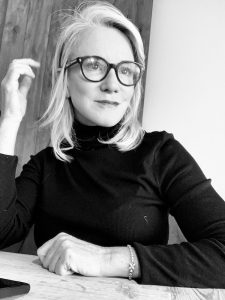 Navigating the corporate landscape is a challenge for anyone: for women, it can be akin to climbing Mt. Everest. It was in the mountains, in fact — in Davos, Switzerland for the World Economic Forum — that Meghan Fitzgerald realized she had been trading her health for her career. As others in Davos shared their stories about their own climb, she saw a disturbing thru-line: in general, the higher women rise, the less they value their own health.

In charge of billions and one of the few women “running the money,” Fitzgerald has worked in the executive suite of three Fortune 500 firms and has deployed more than $3.5B in healthcare deals. She conducted a landmark study of the balance between health and careers, and found that far too many women executives have to sacrifice their own well-being and personal lives as they ascend.

The study was published in Harvard Business Review; soon after, she wrote “Ascending Davos: A Career Journey from the Emergency Room to the Boardroom“, a book about her own experiences and the tools required to reach the top in the corporate sphere.

Fitzgerald recently sat down with us at Young Upstarts to discuss her own career — she started as a nurse and has never forgotten those skills — and how she turned from a hands-on nursing job into the corporate fray and the C-Suite. The bottom line isn’t just financial success, she cautions: our health is more valuable, and we should strategize our careers and jobs accordingly.

What prompted you to write this book in terms of your own experience ascending the corporate ladder?

My corporate climb was messy and hard. I wanted to pen a raw and real account of what it took to pivot from a nursing job on the front lines to the corner office and beyond. I still have dreams and a few other goals to accomplish. This book was one of them.  And another big message in the book that will hit you is “health is wealth”. My hope is that executives don’t learn this too late.

Did any of your experiences as a nurse prepare you for dealing with the dynamics and crises involved in executive leadership?

In emergency medicine there is an important concept called triage. It’s a process where you assign degrees of urgency to wounded or ill patients and prioritize care around who needs immediate medical attention. I have applied this process to my life and business. If you want to ascend, you must learn to focus on what really matters and delegate when possible. The other day I was asked whether I read a specific memo, and my colleague was shocked when my answer was no. In the pile of priorities that memo was last and that is where it stayed. It had zero materiality to the deal or its approval success. Early in my career, I might have stayed up an extra hour and read it twice worrying about missing something.

Whenever I start a new job or join a board, I spend time understanding what is really important to the company, especially around strategy, revenue and capital allocation. I always ask: how does this company make money? Aspiring leaders would do well to “take a CFO to lunch” ask this question. Even nonprofit businesses have financial goals.

Why do you think there are so few women in private equity, and what can be done to change that?

It starts at the top. At the most prestigious PE firms, less than 10% of the senior positions are held by women, especially those in charge of allocating capital or ‘running money,’ as we say in the business. When I became a managing partner, aside from directing our strategy on where to invest, I also helped recruit board positions and management teams. Two of my most senior hires were top women who were the best for the job. So it’s more about a broad network. When senior women take high profile roles, they also bring their connections and bench of qualified candidates with them.

Can you talk about the women executive study you did that was published in the Harvard Business Review?

My study focused on executive women seeking to understand whether they traded off their health as they made more money and gained more power. I came up with the idea for the study one night marooned in a Delta lounge after missing several flights and suffering from a migraine. How many other executives were in that lounge dealing with family illness, divorce, or stress while trying to climb? My study had some surprising results in that most executive women reported their general health as good. This made sense as most are well educated and have good insurance.

However I also found an interesting paradox: when I asked a broad question about their overall health, the more educated, wealthier women reported more days each month that they felt less healthy. More than 50% of respondents said they log over 50 hours a week in the office and take work home with them as well. The top 5% of earners put in the longest hours, with 50% of those earning over $250,000 working 70+ hours a week. Executive women also report high levels of stress: 30% said their change in weight was due to stress, and 26% said they had used medicine for anxiety or sleep problems in past year.

And it doesn’t look like these issues are being addressed: 48% of those studied could not see a doctor due to workload.

How can professionals work to better situation themselves in companies and institutions who have a better approach to health?

You are the first line of defense in a healthy ascent. Early in my climb I was hyper-focused on title and pay, realizing later that good health was like a stock option that pays off later. When negotiating a new position after compensation and title, do a quick health assessment and some reconnaissance about your company’s health culture before joining. Ask yourself: If my Mom were diagnosed with a brain tumor (happened to me), would the company have my back?

Here are more quick questions: How long is your commute? Does your employer have an onsite medical clinical clinic? Do they support flexible hours? What are their childrearing and senior care policies? And when you walk around, do employees look healthy and happy?

If you work for a toxic company or boss, look for an exit ramp before you are overtaken by events and can’t engineer your best plan.

You talk in your book about having a certain kind of drive — you run marathons, practiced ju-jitsu, and keep yourself in the best shape you can. Your motto is to Get Sh*t Done. Do you think professionals need to have that kind of drive to succeed?

There is a saying in physical therapy that motion is lotion. Being mentally and physically active likely helps a corporate climb especially when it gets tough. Everyone I know in the corner office or in a hall of power has drive or a mission that guides them. I think a personal brand and positioning is an important way to memorialize your own mission. What do you stand for and where are you going? On the first night of the class I teach at Columbia University, I ask the students to pen their background and aspiration in a short bio or twitter profile. And for many it’s a start or preview of the journey that lies ahead.

To learn more about Meghan Fitzgerald and her new book, visit www.mailman.columbia.edu/people/our-faculty/mmf2038.