As of 2019, natural gas is experiencing a rapid growth phase. According to a report by International Gas Union and The Boston Consulting Group released in 2018, the average worldwide gas consumption has grown in the last decade by 1.8% per year. Thus, it is the fastest growing energy source after renewable energy. The market expansion is driven by the rapid increase of liquid natural gas (LNG) use, the surge in North American shale industry, and the continual development of gas infrastructures in the Middle East and Asia.

Stock day traders can benefit from the potential growth of the gas market by trading gas-related stocks. To increase the chances of potential profits, you should aim for a funded traded account, which will allow you to enter the market with a more generous deposit. On a side note, Tradenet, the day trading academy founded by Meir Barak, enables clients to access funded accounts and secure up to 70% of the net profits. This is where you can trade gas stocks like a professional.

The gas market is poised to expand given that this energy source is clean, flexible, cost-effective, and quite abundant. Many sectors, including steel, food, and automobile industries require a lot of energy, and gas is among the most convenient sources of power.

Today, the largest gas producers are the US and Russia, with around 766 billion m3 and 635 billion m3 respectively as of 2015, according to CIA’s World Factbook data. Iran, Qatar, Canada, China, Norway, and Saudi Arabia come next. When it comes to proven reserves, Russia and Iran have by far the largest resources of natural gas, so they will continue to be the main players in the industry for the coming decades.

While Iran has the second largest gas reserves in the world, it cannot convert this advantage due to the US sanctions. Thus, the country controls less than 1% of the global natural gas market, with many gas projects being heavily affected by the political conflicts with the Western world.

Russia and China don’t have the best relationships with the US, but their gas exports are not impacted by any form of sanctions so far, as the EU and Asian countries are depending on the natural gas produced there.

When it comes to consumption, Russia and the US hold the first positions as well, with China, Iran, Canada, Japan, Saudi Arabia, and Germany, the US, and Mexico also making the top 10 list. By 2023, China will account for the largest share of global gas consumption growth, surpassing all the continents. 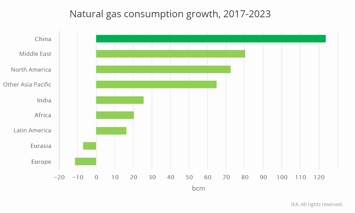 How to Analyze the Gas Market.

Traders who want to deal with gas-related stocks have to analyze the supply and demand changes in different countries in order to spot good opportunities and avoid risks.

Thus, if a natural gas exporter is moving toward an economic or political crisis, it wouldn’t be profitable to buy stocks of companies operating in that particular country. This is a situation when the shares can be shorted. For example, Venezuela would have the potential to become a major gas producer, given that it has considerable reserves. However, the current political crisis doesn’t let it develop in the right direction.

Currently, China and the US are in the midst of a trade war that has some economic consequences. When the situation eases, gas producers might note a bullish mood as the trade of natural gas will increase, especially when both countries play a huge role in the gas market.

Largest Companies in the Gas Industry.

If you plan to trade gas-related stocks, you should start with the large and sometimes emerging companies. Today, the largest gas producing companies in the world are Gazprom, Exxon Mobil, China National Petroleum Corporation (CNPC), Royal Dutch Shell, British Petroleum (BP), Chevron, Total, Statoil, ConocoPhillips, and Eni. As of 2016, these companies accounted for about 30% of global gas production, with Gazprom alone account for 11%. All of the mentioned companies are listed on stock exchanges except CNPC, which is state-owned.

You can trade the stocks of gas companies by watching the news and reports related to changes in supply or demand, which trigger volatility in prices.

If you want to increase the potential profits, you can attend online day trading courses, which can significantly contribute to your trading skills.

What Lord Of The Rings And Batman Can Teach Us About...