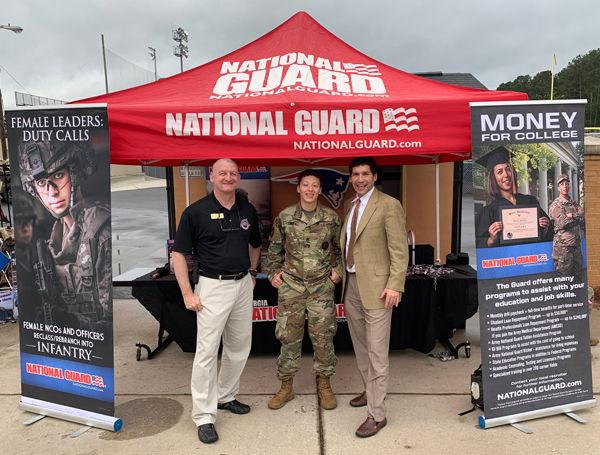 Many jokes circulate about how typical sports students are only attending college based on their athletic abilities, or that they pay more attention to sports than school. But athletics have long been included in school settings for good reason. Team sports foster cooperation, teamwork, and a sense of responsibility that can be applied to other aspects of life. Additionally, keeping the physical body in top shape keeps the mind fit, too. Therefore, the Gwinnett County Public School System has always encouraged sports participation among its students.

Sports participation can also generate money and exposure for the rest of the school, which – in part – raises funds for programs like the Gwinnett County Public Schools Fund. In addition, sporting events like the Corky Kell Classic generate money to help support the programs that raise the brightest and best generations.

Athletics in the school setting is integral to the health of the school, and it provides events that excite the community. Without the help of both monetary and structural support from private institutions like the Gwinnett County Public School Foundation, the excellence of this Georgia county’s school system would not be as well-known as it is.

About Gwinnett County Public Schools and the GCPS Foundation.

The interesting thing about this demographic is that a significant portion of the rest of the students come from very wealthy families. In previous interviews, Aaron Lupuloff talks about how this impacted his own children’s performance at school, and he underlined that the diversity in backgrounds provided a unique learning dynamic in school that, if fostered, had great potential. The problem, however, was how to encourage that potential if so many families attending the schools were below the poverty level.

Research is clear about the impact that systemic poverty has on academic performance. Children with less money are just as bright and hardworking as children from upper and middle-class families, but the pressures they have upon their daily life severely impact their overall performance. 50-70% of behavior caused in humans is environmental, and when a student does not have access to the tools, stable environment, nutrition, and academic assistance they need to do their best, it can negatively impact their ability to thrive in public schooling situations.

Additionally, mixing children from different economic backgrounds without the right support can sometimes have negative impacts. If class sizes are too large, standardization is too fixed, and other factors aren’t right, it can stress students who might be struggling outside the classroom. Students from different backgrounds must also be monitored to ensure that everyone feels safe and comfortable in their environments regardless of their race, gender, economic privilege, and other potentially discriminatory factors.

Based on the drastic differences in backgrounds among the students who attend Gwinnett County public schools and their complex needs, the Gwinnett County Public Schools Fund was established in 2006. Their four main goals include:

These goals allowed the GCPS fund to create a framework that helped children in their public schools succeed no matter what they did. Part of the way that the foundation has been able to do this is through sports-related fundraisers.

The Corky Kell Classic and The Impact of School Sports Fundraising.

Football is a favorite at all levels of education. In recent national surveys, football has ranked number one in popularity time and time again, especially among young adult males. The Corky Kell Classic is a Georgia football tradition that started in Atlanta in 1992 — named after Wheeler’s former head football coach. The set of games pairs off the state’s best high school football teams in a collection of games that start at the beginning of the football season and run for three days. The first games played at the Corky Kell Classic only consisted of two different high school football teams, but in the 27 years that the playoffs have been around, they have increasingly added more high school teams to their lineups. The goal of Corky Kell Classic is to raise money for the Corky Kell scholarship fund, which helps Georgia students pursue their goals regardless of their financial status.

The Corky Kell Classic is only one example of how school athletics can effectively build up communities. During his interview at the Corky Kell Classic, Aaron Lupuloff mentioned that, for the 10th year in a row, the community had already met its $200,000 goal for athletic fundraising. The most exciting thing is that the Corky Kell Classic is not specific to Gwinnett County – counties from all around Georgia have participated in the event, making it a potential way for many areas of Georgia to fundraise for their school counties. This fundraising paved the way for more advanced events, travel, updated uniforms, and proper coaching for a variety of sporting events at all schools. This provides safe, accessible, and structured activities for students and offers the building blocks for success in academics and future career goals. However, having well-supported public school sporting events also brings the community together in a way that allows for greater diversity and continued funding for school excellence.

The trouble with maintaining a sports team that gives back to the community is that the teams themselves require funding to sustain their relevancy within the community. Part of the funds raised from sporting events goes into maintaining athletics over the long term – otherwise, uniforms will eventually run themselves ragged, students will be less likely to involve themselves in sports, and the reputation of that team will ultimately decrease. It can be hard to focus on raising money for school athletics when many parents were raised to believe that academics came first. However, academics and school sporting events may be more connected than initially thought, and supporting one might support the other according to science.

The Benefits of Sports in Academic Settings.

While many might argue that sports take away from time that could be spent studying, many studies indicate that team sports might benefit students. At the neuroscience level, researchers believe that having what is called “dual careers” is foundational to the necessary elements of success. Having dual careers does not necessarily point to giving 80 hours a week to a specific task. Instead, it is a theory that speaks to levels of dedication among people. Sports, or mentally strenuous extracurricular activity like speech and debate, rewires the brain toward training and self-instilled success. For sports, the addition of serotonin caused by physical activity provides stress relief and intellectual stimulation, which help students feel more aware of themselves and perform better academically.

As for sports at Gwinnett County Schools, Aaron Lupuloff points out another common benefit to emphasizing school sports – motivation to do well. “Sports and academics go hand in hand,” Lupuloff said in a recent interview at the Corky Kell Classic. He went on to emphasize the academic requirements and attention to grades that are foundational to Gwinnett County public schools’ athletic teams. Gwinnett County students are required to have a B in their classes to participate in extracurricular school-sponsored sports. If your grade drops below a B while you are part of the team, you must sit out until you can raise it back up. This policy, as well as the scientifically-backed benefits of sports, means that Gwinnett County student athletes are some of the top performers in the state both academically and athletically.

In addition to working with students on an athletic level, the GCPS Foundation strives to help them be the best they can be on a social level. This is why it recently partnered with the Georgia branch of the Army National Guard to allow students to see how academics, cooperation, and athleticism can all work together. The Georgia branch of the Army National Guard is integral in providing disaster relief to Georgia and surrounding areas, which are especially prone to both hurricane and tornado damage, among other national disasters.

The “Guard Your School” Program, a cooperation between the GCPS Foundation and the Air National Guard, provided students with the opportunity to see what commitment to the army and its history could be like. Participating in these programs also required a certain level of academic excellence. Activities included learning about military vehicles, participating in military exercises like chin-ups, and allowing kids to try and figure out an escape room.

Joining the army national guard takes a lot of commitment, just like the commitment it takes to join and participate in one of Gwinnett County Schools’ athletics teams. If a student joins the Army National Guard on a full-time basis after they graduate from high school, they spend 36 days of the year deployed locally with their unit and 100% of their college or trade school is paid for. Eventually, as some students finish their degrees and return to the area, this boosts the area’s economy. In the future, the influential leaders who are fostered through programs like the ones provided by the ANG are likely to be the ones who give back to their school districts, both financially and voluntarily.

Raising Money for Local Schools and Getting Help from the GCPS Foundation.

The GCPS Foundation is dedicated to helping kids achieve on all academic levels, including providing them with grants to travel for curricular and extracurricular reasons, paying for the SAT, supporting projects for teachers who cannot get funding, and supporting the efforts of school teams. When students and instructors have the tools they need to succeed, they are more likely to achieve their goals. While the foundation does incorporate advertising efforts into their campaigning, as well as committing to public appearances like Aaron Lupuloff’s interview at the Corky Kell Classic, the majority of the support comes from word of mouth.

A common question that executive director Aaron Lupuloff receives about the foundation and its efforts is, “how can I get involved?” The question comes from people from all backgrounds, and the best thing that Mr. Lupuloff can recommend is to call and get involved, especially if you belong to a local group or organization that might be able to provide substantial help. Recent partnerships have included the Army National Guard, the local hospital, and more. Partnerships with larger organizations and local faces help, but so does the involvement of the community. When parents and community members donate their time and money to fundraising efforts, they bolster the community spirit and pave the way for more fundraising opportunities.

Activities and partnerships that raise awareness of fundraising efforts are also important.

“The foundation looks to provide students with opportunities and programs, such as the ‘Guard Your School’ program, to help get the word out about the benefits of the Foundation,” said Aaron Lupuloff. Activities like these not only raise team spirit among locals but also brings in outside interest, which in turn can help the longevity and health of a foundation like this. Finally, when students feel supported, they grow a particular loyalty to the place and people that supported them. Future engineers, shop maintenance specialists, craftsman, athletes, and more who were supported by school activities return to the school and community, which expands the community in the long-run.

Are you a student, teacher, or school who feels like they need assistance from the Gwinnett County Public School Foundation? Help is available by calling your school district or by reaching out to the GCPS Foundation itself. They offer grants for teachers, student scholarships, and more.