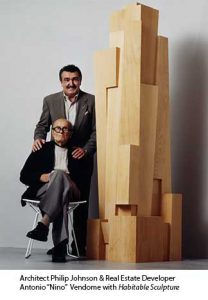 Between 1900 and 1910, about two million immigrants fled Italy and risked their lives to get a fresh new start in the United States. America has, for impoverished Italians, become synonymous with opportunity.

So it was with developer Antonio Vendome’s family who arrived in Astoria, Queens in New York with hardly any money in their pockets and heads full of dreams. Nino, as he was called by his parents, was just three years old and he couldn’t have been prepared for the hard years ahead.

They were a family of farmers, hardly a skill that would be applied in the urban jungle of Queens. Ten years removed from World War II and resources were scarce. It was more so for immigrants who not only had to compete with Americans for the limited number of jobs available but also familiarize themselves with the culture and language in order to survive.

One thing that Vendome remembers was that even if how hard life was then, his parents ingrained in them the value of honesty and integrity in whatever they do. Astoria then was on the cusp of change. Wave upon wave of immigrants flocked to the area as construction was in boom due to the housing tenements and buildings being built to accommodate the growing population. There was also always work on the waterfront with docking cargo ships.

When he was just 10 years old, Vendome showed off his enterprising spirit when he shined shoes to help the family. He also built his network this way as he navigated his way through every nook and cranny of the neighborhood, making friends with local entrepreneurs, residents, and street hawkers along the way.

He later started a coffee cart business and found some success there on an investment model that would have scared most businessmen of today. “When I had a $1.00 I invested $1.10 so I was always a dime short,” Vendome mused.

But locals knew him to be a man of integrity, like his father taught him, who always made good on his debts.

True to his daring nature, he opened a restaurant when he was just 21 years old, selling to-go sandwiches to busy office employees, dock workers, and construction workers. He didn’t know it then, but it was the first step for him to reach his dreams.

Vendome said that growing up was hard and there were many times that he felt like giving up. “What carried the day was persistence, hard work and a commitment to my dream,” he explained.

Check out pieces of art from Antonio “Nino” Vendome at the MoMa in New York.