by Pascal Finette from Singularity University

“May you live in interesting times.” ~ Chinese Proverb

This (somewhat liberally translated) Chinese proverb is something you hear often in Silicon Valley these days. Some say it is a curse. Regardless, nobody denies its truth when it comes to the change technology brings to our world. Driven by the exponentially accelerating rate of technological progress we now have (literally) supercomputers in our pockets, access to the world’s information at our fingertips, can sequence genes in our kitchen labs and 3D-print prototypes on our desktops. Gordon Moore’s fifty year old predication that “the number of transistors in a dense integrated circuit doubles approximately every two years” (know commonly as Moore’s law) holds up to this day and has long spilled over into other technologies and industries: Your iPhone 5s has 1,000 the computational power of a Cray 1 supercomputer from the mid-70s at about 1/50,000th of the cost – a staggering fifty million times price/performance improvement. Sequencing the human gene took us a decade and $2.7 billion at the beginning of the 21st century. Today it takes us now mere hours and costs less than $1,000. And solar energy reached parity in its price/performance ratio to conventional sources of energy like coal – turning a scarce natural resource into something which will be abundantly available at little to no cost in the near-term future.

Experts will gladly tell you that computational power is already abundant, as is storage of all that data our connected systems produce. Sequencing our genome will be close to free within the next ten years or so. And you will soon pay a small flat fee for being connected to the electric grid but not pay for the actual electrons anymore.

All this progress, at an ever increasing pace, creates a wealth of new opportunities and disrupts existing markets faster and more forceful than ever before. Ray Kurzweil formulated this in the “Law of Accelerating Returns”: Once an industry becomes information enabled it moves on an exponential curve. Thus finding industries which are not yet information enabled (and there are plenty) and bringing these into the information age, is one of the most promising business ideas these days.

“We shall require a substantially new manner of thinking  if mankind is to survive.” ~ Albert Einstein

At the same time humanity faces pressing and severe problems. The United Nations predicts that by 2050 our planet will be populated by 9 billion people, which makes food supply a fundamental issue. Today, with about 7.2 billion people living on Earth, we technically have enough food – it is just not equally distributed (which by no means is an easy problem to solve). To feed the projected number of people we need to grow our agricultural output by 2% year over year. For the last decades we grew output by 1%. Which makes one look at the current GMO debate from a very different lens.

Global Warming is already a major contributor to unpredictable and often devastating changes in weather patterns. A large number of experts suggest that by the turn of the century the sea levels will rise by as much as two meters. Whole countries such as Bangladesh will be flooded, should we see such a dramatic rise of our oceans. This will result in mass movement of people as they are fleeing to higher ground.

All these, and many other, challenges are large-scale, often intertwined, complex and pressing. And technology, particularly the technologies which move on an exponentially accelerating curve, can and almost certainly will be our best tool to solve these global grand challenges.

Let me introduce you to my friend Nithya Ramanathan. Nithya teaches Computer Science at UCLA. A few years ago Nithya started to fixate on a problem which affects millions of people, mostly children, worldwide: Spoiled vaccines.

Most vaccines require proper cooling and handling on their journey from point of production to consumption. They need to be kept at a specific temperature without too much variance. This logistic chain is called the cold chain. And 75% of vaccines in the developing world show signs of freezing, with an estimated one-fourth to one-third of all vaccines which are administered being ineffective.

Nithya, together with a small team, developed an Internet-connected temperature sensor which travels with the vaccine fridge through the cold chain. Constantly measuring the temperature and sending information about irregularities to both the nurse and doctor who are administering the vaccine as well as a cloud-based software, Nithya’s device provides, for the first time, real-time insights not only into the status of an individual batch of vaccines but also an aggregated view into where the problems typically occurs.

The device is now used in six countries; in 3 states in India alone there are now 11,000 devices in the field, saving the lives of millions of babies each year. The remarkable thing about Nithya‘s solution is that her device is incredible simple: By leveraging a readily available “exponential” technology – a cheap, $30, Chinese-manufactured Android smartphone combined with a tiny bit of simple, custom hardware, a temperature sensor and a bit of software, Nithya’s team built the most successful intervention in the field today.

“Work is love made visible. The goal is not to live forever; the goal is to create something that will.” ~ Kahlil Gibran

Here’s the reason why I am telling you all this: Everybody can do this. Everybody can be Nithya, get up, assemble a small team, pick a big, hairy problem and tackle it. Even if are not a software developer, hardware hacker or bio engineer – I am confident that you know people who are.

Collectively we are creating a world of technological abundance. Readily available, cheap and easy to use. It is on us to use it in the best possible way. It is on us to ask ourselves: What does it take to make the problem go away?

*This article is excerpted from “The GuruBook: Insights from 45 Pioneering Entrepreneurs and Leaders on Business Strategy and Innovation“ 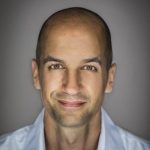 Pascal Finette heads up the Startup Program at Singularity University, where he grows startups tackling the world’s most intractable problems leveraging exponential technologies. He has previously started a number of technology companies and used to work as Head of eBay’s Platform Solutions Group in Europe and created Mozilla’s accelerator program WebFWD.