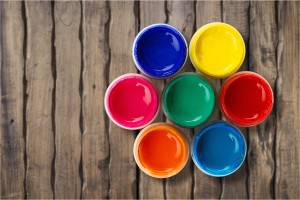 Have you ever walked into an office or store, and instantly felt a rush of energy, as if you had stepped into the middle of Times’ Square or a club dancefloor? Or on the other end of the emotional spectrum, have you been overcome by a sudden sense of gloom and despair — only to have it dissipate when you leave the environment?

While there are many factors that can contribute to these emotional reactions — including the fact that some environments are more toxic than others (physically and psychologically!) — all else being equal, you’ve experienced something that behavioral scientists, interior design firms like Key Interiors, and indeed, paint companies have known for decades: paint color in the office has a significant, and in some cases dramatic, impact on mood.

Whether you’re leading a business today or plan on doing so tomorrow, you’ll be in charge of making decisions that enhance workplace productivity, performance, engagement and of course, attitude. To that end, here’s the backstory on five common office design colors, and the kind of impact and influence they may have on your team:

Blue typically promotes a calm, soothing feeling — and it’s also associated with intelligence and trustworthiness, which is why many companies use it predominantly in their logo and across their branding. It’s also why many lawyers instruct their clients to wear blue when they’re up on the witness stand or in front of the cameras!

Green is the color of nature, and as such is generally associated with a sense of peace, rootedness and organic growth. What’s more, Kermit the Frog had this one wrong: it’s actually quite “easy to be green,” because green is right in the middle of the color spectrum. This means that the eye has an easier time registering it than colors located towards the end of the spectrum, such as red.

Speaking of red: it’s associated with energy, power, authority and things that stand out from the crowd. Indeed, it’s the inherently eye-catching aspect of red that makes it an extremely popular choice for corporate logos. However, while red can certainly grab attention, some experts feel that it’s not a good selection for offices because of its “alarming” connotations and associations (stop signs, sirens, red “X’s” on tests, etc.). And as noted above, because red as at the end of the color spectrum, prolonged exposure to it can cause eyestrain. So while it may be fine to have some red artwork elements in the environment, red curtains, carpets, or wall colors/coverings is generally not a good idea.

Black is associated with style, elegance and entertainment — which is why it’s still the main paint color used in many clubs and bars. However, as far as day-to-day office colors go, it’s generally not seen as a good idea because it can trigger feelings of loneliness, isolation, and gloom. Since it absorbs light and doesn’t reflect it back to the external environment, black can also make environments darker and seem smaller.

Whereas black absorbs all colors, white does the opposite: it absorbs none of them. However, this isn’t necessarily a good thing as far as office wall colors go, because prolonged exposure can cause eyestrain.

With this being said, white (and off-white) are still among the most popular choices among commercial property owners for two reasons. The first is that white is neutral and most people don’t have an aversion towards it (some people might balk at leasing an orange or purple office!). The second is that white can make space seem larger and more spacious.

Naturally, color is not the end-all-be-all factor when it comes to creating a productive, efficient, engaged and energized environment. However, it does play a larger role than you may realize. As such, it’s definitely worth your time to do some research and make sure that in addition to esthetics, that you’re taking psychology into consideration as well. Your employees will thank you!