by Dana Loberg, co-founder and CEO of MojiLaLa 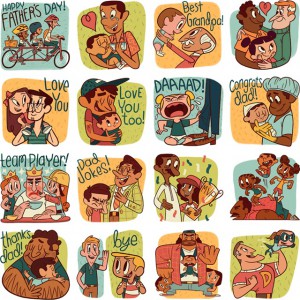 With the 2017 business year in full swing, entrepreneurs are back at their desks and thinking deeply about how to set themselves up for a successful new year. For beginning entrepreneurs, the burning question is, “What new business trends should I adopt if I want to increase revenues this year?”

But what about creative types — those who have a passion or talent that hardly brings in enough money to pay the bills? For them, the question is, “How do I even start to monetize my work?”

The good news is that this year will be a turning point for creatives-turned-entrepreneurs. In 2017, artists will be able to start monetizing their work and distributing it in a way we’ve never seen before. This year will be the year of the “emojipreneur” — the artist who turns a profit by creating emoji and stickers that are used on billions of smartphones all over the world.

Over the past year, emoji collections have been an exclusive playground for celebrities-turned-entrepreneurs such as Kim Kardashian, Justin Bieber, and Blac Chyna, who have the funds to hire top artists and the star clout to charge users for the final product.

But what if there were a way for artists to get their own sticker and emoji art into billions of hands, without the need for celebrity status or funds? What if this unleashed tens of thousands of diverse emoji — allowing users to freely express themsleves through every kind of emotion? With Apple’s iMessage launching an App Store for stickers and emojis last September, the impossible just became possible.

The new emoji and sticker marketplace can do the following:

1. Directly connect artists and users in a symbiotic relationship — artists are able to distribute their work simply (they don’t have to write a single line of code), quickly, automatically, and completely free of charge, while users have an endless supply of emoji at their fingertips.

3. Give ordinary iPhone users access to vast collections of original emojis and stickers on trending topics, which they can use in iMessage.

MojiLaLa — an emoji marketplace that sources emojis and stickers from all over the world — has developed a way to facilitate the relationship between artists and consumers. Founded by artists who understand the struggle to make ends meet through creative work, MojiLaLa monetizes emoji distribution by sharing 50% of profits with the artists who created the emojis.

As conversations become shorter and communication becomes more visual, the emoji economy is transitioning from a niche market in Japan to a mass, multi-billion dollar industry in the USA. Artists around the world are jumping at the opportunity to earn cash for their work, while simultaneously getting their portfolios out there for the world to see. That’s why 2017 is the year of the “emojipreneur.”

Dana Loberg is the CEO and co-founder of MojiLaLa, an emoji marketplace for artists and studios from all over the world. By connecting designers and their emojis with chat platforms, keyboards and bot platforms, artists get greater distribution, monetization and visibility for their sticker-making skills. Prior to founding MojiLaLa, Dana was also the cofounder of MovieLaLa: a mobile distribution platform for Hollywood studios.