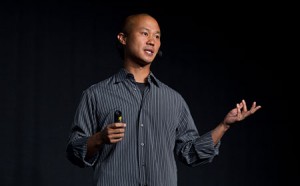 Though each CEO will have a different way to run his or her business, the great ones seem to share some of the same top qualities.

If you’re interested in learning more about what makes a CEO great, consider a few of the following real-world examples from current CEOs:

Not Afraid of Change.

As a CEO, you must always be looking ahead and searching for the latest innovations. While you don’t normal think of PepsiCo when you picture health foods, CEO Indra Nooyi has led the company to record financial results by emphasizing healthier foods. She’s very focused on health, and believes Pepsi plays an important role in fighting the obesity epidemic. Nooyi recognized that attitudes toward soda and snack foods were changing, so she helped the company branch out and offer healthier options like oatmeal and fitness drinks.

Top-down management structure is becoming a thing of the past. Instead, top CEOs are now turning toward a business culture that encourages collaboration. Insureon CEO Ted Devine says he likes to roll up his sleeves and work right beside his employees. Devine also talks about how one of his youngest employees approached him with a product that wasn’t working. Within 15 minutes he was able to get a meeting together with his employees and immediately start making modifications to fix the problem.

All too often, employees will consider the CEO out of touch with the inner workings of the company. Even though the CEO makes a lot of the big decisions, he or she typically sits in the fancy suite away from the cubicles and daily happenings of the business. However, Tony Hsieh, CEO of Zappos.com, wants to show his employees that he considers everyone who works with him as an equal. He turned down the corner office, and instead chooses to put his desk right in the middle of the workspace, surrounded by his employees.

Shows Loyalty to the Company.

To make sure CEOs don’t lose the trust of the employees, they must show loyalty to the company. They can’t credibly ask employees to commit to the company when they only seem to have their own interests in mind. Oracle CEO Mark Hurd didn’t take a pay raise when he accepted the leadership position at the computer technology company. Rather, he took stock options and bonuses to show that his success was dependent on the success of the company.

Open to Push Back.

Great CEOs understand that they don’t always know what’s best, and they’re willing to listen to opposing ideas. In 2008, Starbucks CEO Howard Schultz wanted the coffee stores to stop selling their melted-cheese breakfast sandwiches since the smell covered up the aroma of the coffee. However, other leaders argued to keep the sandwiches. By listening to other opinions, everyone reached a compromise where the sandwiches stayed but were cooked differently to change the aroma.

Whether it’s being open to change or showing loyalty to the company, these are just a few of the qualities that you’ll find in great CEOs.