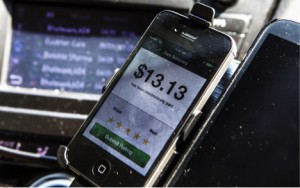 Uber has quickly spilled into the mainstream as an affordable alternative to taxicabs. This is excellent news for those who do not own a car as well as those who are in search of work.

Yet the question begs: how much do Uber drivers really make? The surprising truth is that these individuals really do earn a “living wage”, especially if they live in an area where there is a strong demand for transportation services.

On average, Uber drivers make around $19 an hour. This hourly average is nothing to sneeze at once you consider that the minimum wage in most states is around $8 to $9 an hour. Those who have enough work to complete a 40-hour work week as an Uber driver need not look for work elsewhere. Uber rides are in-demand as they are comparably cheaper and easier to reserve than traditional taxicabs. Anyone with a smartphone can reserve an Uber ride in mere seconds. There is no need to pay costly overhead fees for receptionists, union dues and other expenses that saddle conventional taxicab drivers. This low-cost model is largely responsible for Uber’s rampant popularity.

Uber drivers in big cities like Los Angeles tend to out-earn their small town counterparts by a wide margin. As an example, Uber drivers in “mega cities” earn upwards of $20 to $25 per hour. Those who have learned how to become a NY Uber driver have reported earning more than $30 per hour. Those who drive for Uber in small rural communities sometimes as little as $10 per hour. The difference in compensation is attributable to a number of factors. For one, salaries of urban dwellers are higher than those who reside in rural areas as the cost of living is much greater. Add in the fact that big cities attract a steady flow of people and it is easy to see why urban Uber drivers are extremely busy.

The compensation figures listed above are on a per-hour basis. However, Uber does not pay its drivers on an hourly basis. Nor are Uber drivers compensated with a flat salary. Uber drivers receive a percentage of each fare paid by those in need of a ride. Uber takes a cut of each fare to in order to maintain its digital platform that connects Uber drivers to those who need transportation.

Keep in mind that Uber driver compensation is not pure profit. Uber does not cover gas or vehicle repair costs as the company’s drivers are considered to be independent contractors. Expenses for gas, auto insurance and upkeep must be subtracted from compensation before the true take-home pay is determined. Add in the fact that Uber drivers have to pay income tax like everyone else and their net income is much less than it appears after payments are initially received. Though Uber provides few benefits, it is important to note that the company provides all drivers with a comprehensive/collision and liability/uninsured motorists auto insurance policy when they are logged into the app. Uber also pays for vehicle damage inflicted by passengers as well, in some cases, the cost of the Defensive Driving Course one needs to take to get their TLC license.

Unfortunately, Uber drivers cannot be tipped directly through the Uber app on passenger smartphones. Yet this does not stop the majority of passengers from leaving friendly and prompt drivers with a tip. Remove tips from the equation and Uber drivers would not earn nearly as much. Uber customers tend to be cognizant of the fact that they can pay through their smartphones and use cash to reward the driver for a job well done.