by Stephen Wunker, David Farber, and Jessica Wattman, authors of “Jobs to Be Done: A Roadmap for Customer-Centered Innovation“ 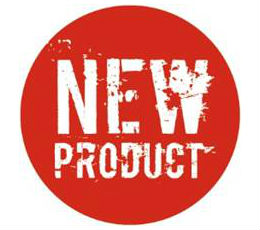 This past August, Mass Innovation Nights launched its 11th MIN FOODIE event in Somerville, Massachusetts. Bringing together ten food and food tech startups, the night was an opportunity for these new business to showcase their ideas and get the word out about their companies.

It was impressive to see quite a few startups address tasks that consumers would like to prioritize in the everyday but struggle to get done. One company, for example, launched an app to help individuals find and buy local. Another made it easier for people to eat all-natural foods. A third focused on enabling people to reward themselves without feeling guilty. Having worked with a number of leading food companies, we have seen that customers are often willing to pay a premium for these exact types of services. This suggests that these young startups may be on to something.

Looking at the winner and the runners-up in the event, three big lessons stand out on how companies can differentiate themselves in crowded markets:

1. Find the intersection of pain points and white space.

The event winner – Minus the Moo – offers real full-dairy ice cream that lactose-intolerant customers can enjoy using the same ingredients as traditional ice cream. The difference–adding an enzyme that breaks down lactose and eliminates the painful side effects. Given that roughly two-thirds of the world’s population suffers from a reduced ability to digest lactose, this is no small population. These consumers are generally forced to choose between digestive distress, or a product with inferior taste and texture. By eliminating the pain points associated with non-dairy ice creams, Minus the Moo gets rid of the need for a tradeoff and taps into a large pocket of demand.

That’s the first half of the picture. At the same time, the company’s research shows that growth in the ice cream industry is being driven by craft market products rather than the mass produced ones. Customers have become more interested in supporting local businesses and reducing their intake of artificial ingredients. If you look for companies who offer artisanal, full-dairy ice cream for lactose-intolerant customers, there is virtually no one. Minus the Moo is competing in essentially uncontested space. With this level of savviness, it was a sure winner of the competition. 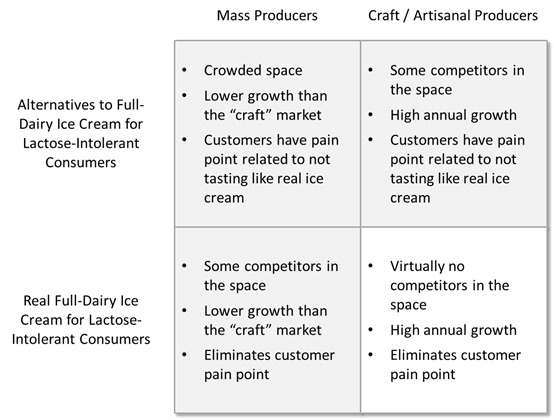 2. Reduce obstacles to using a product.

Seedsheet, one of the runners up, calls itself a farm delivery company. The company is based on two critical assumptions. First, a large number of people would like to garden. Second, many people who would like to garden don’t because of the challenges involved.

Seedsheet makes gardening more accessible to the general public by doing away with the most problematic aspects of the process. The company has created fabric overlays that contain seeds stored in dissolvable pouches — seedsheets. These sheets are simply laid on the ground (or in a bucket, or planter) and watered. The pouches dissolve, dropping seeds to the right depth for what you’re planting. The sheet itself blocks weeds from coming though. The seeds are also spaced to avoid crowding, and group plants that need similar bugs, or need to avoid bugs, near each other. Finally, the sheets make it easier to grow things that can be used together, with offerings such as salad gardens or pizza gardens. By making it harder to make common gardening mistakes, Seedsheet has opened up a whole new market and, hopefully for the company, a large revenue stream.

A second runner up, MOJO, sells individual bottles of cold-brewed coffee drinks. While the specialty coffee drink market is undeniably crowded, MOJO has focused on targeting individuals with specific under-satisfied needs. For energy junkies, MOJO boasts 170 mg of caffeine in each 8-ounce serving, a fair bump above the standard cup of coffee. For a segment at the other end of the spectrum – those who want caffeine but typically dislike coffee – MOJO’s drinks get rid of some of the common complaints about coffee, such as its acidity and bitter aftertaste. By understanding where there are pockets of dissatisfaction, MOJO has carved out spaces to play in an otherwise competitive industry.

Entrepreneurs often have what it takes to come up with great ideas. But even with proper funding and an ability to execute on those ideas, finding space in a crowded market can be tough. Winning startups can overcome that challenge by resolving pain points that the competition hasn’t addressed, reducing obstacles to consumption, and finding segments of the market that are under-satisfied with existing solutions. It is easy for young companies to get carried away touting all the things that are great about their new product. Focusing on those key factors that allow for clear differentiate from competitors, however, will ultimately determine success.

Stephen Wunker, David Farber, and Jessica Wattman are growth strategy and innovation consultants at New Markets Advisors, and co-authors of the forthcoming book “Jobs to Be Done: A Roadmap for Customer-Centered Innovation“.