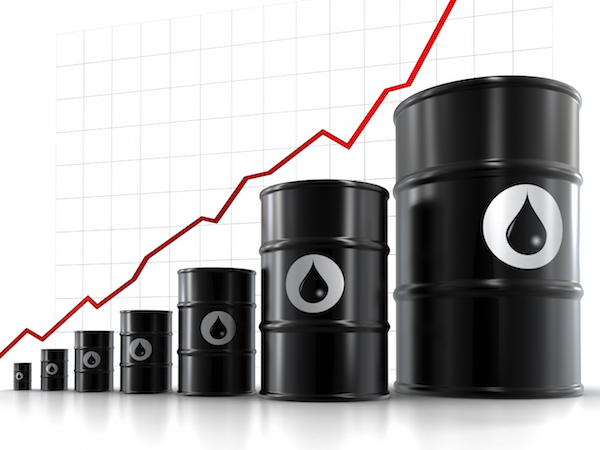 WTI crude oil prices are trading in a relatively tight range between $45 and $50 per barrel. With oil futures, contract prices fluctuate wildly depending on issues such as supply and demand, inventory and the performance of oil ETFs. WTI oil futures prices have been moving lower on the back of rising inventory levels in the US. As at 14 October 2015 the API report concluded that oil inventories fell by 1.2 million barrels for the week ending on Friday, 2 October 2015. The report issued on 15 October reflected a 0.5% decrease in the price of WTI crude oil to $46.38 and a 0.8% decrease in the price of Brent crude oil to $47.87. Louisiana Light crude oil was trading -1.0% lower for the week at $47.26.

US domestic production of crude oil was listed by the EIA (Energy Information Administration) at 9.096 million barrels on 9 October 2015, down for the week. The total crude oil and petroleum products as at 9 October 2015 was 2,002,084 (thousand), and crude oil including SPR was listed at 1,163,687 (thousand). The US currently has 29.8 days of supply based on its current inventories, higher than at any point since the 4th September 2015. US total crude oil and products exports were fixed at 4,561 (thousand) for the past three reporting periods. Crude oil alone was recorded at 526 (thousand) for the same period under consideration. In terms of US crude oil imports, the figure increased from 6,542 (thousand) on October 2, 2015 to 4,849 on October 9, 2015.

The EIA compiled comparative graphics of the 2013/14 retail prices for gasoline vs the 2014/15 prices. The results confirm what all binary options traders already know: gasoline prices have greatly receded on the back of an oversupply of crude oil, slowing demand from China and the competition between Brent crude oil and WTI crude oil, among others. The increased supply on the global markets has made it virtually impossible for the price of crude oil to rise without increasing the demand or the price of it. The disparity between the two metrics was most pronounced in February 2015 when the price was trading just shy of $2 per gallon. The price has been consistently moving higher as the equilibrium price point finds a new level where diminishing supply meets demand. For the week ending 12 October, the retail price of gasoline per gallon was $2.337, up $0.019. However, the price remains $0.870 down for the year. The average price in the US for crude oil was last recorded at $2.34 per gallon for the week ending October 12, 2015.

Futures prices for crude oil are also trailing lower on the markets. The 2013/14 price of Crude oil futures was hovering above $95 per barrel. That has dropped precipitously to under $50 per barrel for the 2014/2015 period. Futures prices for crude oil for the week ending 9 October were at $49.63, up $4.09 for the period. However the price of crude oil remains $36.19 lower for the year. Maintenance can interrupt the supply of crude oil on the markets, but contingency plans are often put into operation to avoid such eventualities. Supply reductions in crude oil result in price increases, ceterus paribus. The US has multiple sources of gasoline and distillate supply, including imports from around the world, pipelines from the Midwest, pipelines from the Gulf Coast, and imports from across the Atlantic basin. The west coast of the US is particularly vulnerable to supply shortages since it is so far away from supplies. The vast majority of East Coast gasoline consumption comes from Western Europe, Canada and Mexico, and Asia/Oceania.

The EIA is also forecasting a sharp decline in Crude oil prices by December 2015, when it believes that prices will fall to $2.03 per barrel. The reasons for this include the ongoing supply glut, the weaker USD and the Fed’s decision not to raise interest rates at this time. During September 2015, the total value of crude oil production declined by 120,000 barrels daily. These declines are likely to continue for several months into 2016. And this will likely result in WTI crude production levels of 8.9 million barrels per day in 2016 – down from 9.2 million barrels per day in 2015.

Over the years, there has been a sharp decline in the production of crude oil in the US. However, that trend has reversed and there is substantial development of America’s oil industry. Fracking and horizontal drilling are ways of reaching ever-deeper supplies of oil and gas from shale formations. These massive supplies of US crude oil have reduced American reliance on Middle Eastern oil. In terms of meeting the domestic demand, US crude oil production is confronting the challenges head on. Binary options trading sites have been particularly bearish in recent months vis-à-vis the price of oil. Put options are the order of the day as supply and inventory levels outstrip demand. Together with Canada, the US was producing 11 million barrels per day by 2013. That number is set to increase further over time.