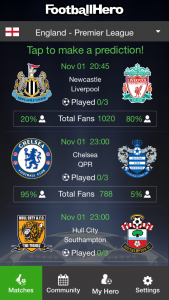 Soccer prediction mobile apps are a dime to a dozen, but what do you expect when soccer – football to the rest of the world – is such a global sporting phenomenon? But what may be a lot rarer is one that actually is based around the engine originally built for a stock trading app. FootballHero is created by MyHero, the Singapore-based makers of highly successful stock trading app TradeHero – which is ranked the No.1 finance app in over 80 countries – as a free social football prediction game that allows users to predict football scores from leagues around the world.

Whether it’s the clash of the titans in the UEFA Champions League, the samba fight of Copa America or the Manchester derby in the English Premier League, FootballHero allows users to collect points from correct scoreline predictions and then ranked on leaderboards according to their point totals. Yet the mechanics behind FootballHero are the same ones behind TradeHero, the idea of leveraging information brokerage and tapping on the collective knowledge of a specific (passionate) community.

MyHero CEO and founder Dinesh Bhatia, a football fan, admits that the concept for FootballHero actually came first. “We’ve had it planned in the pipeline even before our first app, TradeHero,” Bhatia says. “Here at MyHero, we are all about realizing intellectual capital – predicting football scores accurately requires an understanding of the game and tactics, the same way doing well in the stock market requires a decent knowledge and analysis of the market.”

While MyHero created FootballHero as an app for purely fun purposes, it won’t be any surprise if users leverage those predictions for actual betting.

FootballHero is available for download on both the iTunes App Store and Google Play.