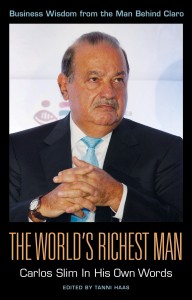 Mexican business magnate Carlos Slim, may be consistently ranked among the richest men in the world – he’s listed by Forbes as the world’s wealthiest individual from 2010 to 2013 – but unlike his similarly wealthy peers not much is known about him. Slim, taught by his business father Julián, began building his business empire from the tender age of 12 when he first bought shares in a Mexican bank, and since that first investment managed to amass a massive fortune to the tune of over $67 billion by 2014.

But the book “The World’s Richest Man: Carlos Slim In His Own Words” doesn’t cover any of Slim’s rise to riches. Edited by Tanni Haas, the book essentially compiles over 200 Slim’s sayings from various sources into one book. Whether they are words he’s given in interviews, speeches at conferences and other business events, or addressing students and faculty at tertiary educational institutions, these quotes cover the gamut from business, entrepreneurship and philanthropy to leadership and life in general.

To give you an idea, these quotes include:

“If you’re in business, you need understand the environment. You need to have a vision of the future, and you need to know the past.”

“Mistakes are normal and human. Make them small, accept them, correct them, and forget them.”

“Any personal crisis—you have to use it to get stronger.”

“Do not allow negative feelings and emotions to control your mind. Emotional harm does not come from others; it is conceived and developed within ourselves.”

“All businesses make mistakes. The trick is to avoid large ones.”

“When we face our problems, they disappear. So learn from failure and let success be the silent incentive.”

“You have to have an international reference of competition. You have to go beyond your home.”

With quotes compiled from varied sources and mashed together into different chapters depending on the theme, reading “The World’s Richest Man” can be slightly jarring as there’s no real flow from quote to quote. But that may not be a bad thing – it’s concise and easily-digestible, which one can finish in a single sitting or pulled out for a quick read.

But most importantly, “The World’s Richest Man” gives a look into the mind of a modern yet elusive business icon – the first non-American to breach the list of the world’s wealthiest people – and the empire he has created, one that no other source can provide. As such, it’s a recommended read for aspiring and established entrepreneurs of any stripe, anywhere.