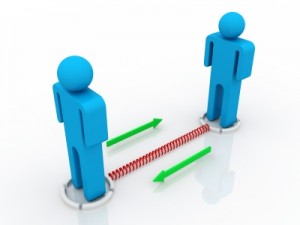 It recently occurred to me that I could make one simply change in my daily routine that would have a significant impact on the productivity of both me and my team.  I noticed this after checking my OmnicontextTM Personal Analytics account to see where I had been spending my time at work.  I realized I typically have seven or eight daily “email conversations” (where I exchanges emails on the same subject more than 3 times per day).

Case in point is an email exchange I had last Tuesday with Jay Smith, one of our software engineers.  I assigned a task to him by sending him an email with a description of what I would like him to do.  The task I’m talking about had half-a-dozen sub-items.

John replied with a question in regard to one of those items.

I answered him by email because I thought it will be the only question from him.  But, twenty minutes later, I got an email with a question regarding another item from the task list. Instead of answering him by email, I made a phone call and we defined and discussed all the unclear items that he had.  It turns out there were about five such items that I needed to clarify.   Instead of sending at least ten emails back-and-forth between the two of us, we saved time and were able to clarify all the unresolved issues within ten minutes.  If we had done it by email, it would have taken thirty to thirty-five minutes from each of us to read, write and respond to each of our emails and there would have been no guarantee, after all that, that we fully understood each other.

In another instance, our Web Reports team was beginning a new project to add functionality to one of Web Reports applications.   A total of four people were participating in the initial phase of the project.   I sent an email to all of them with a draft of what we wanted to include in the new release.   After I received five reply emails from team members with feedback, suggestions, remarks and additional proposals, I organized a conference call to save all of our time and clarify what we were trying to accomplish.  The conference call took twenty minutes and everyone came away with a reasonable idea of the overall scope of the project, which was then ready to be sent on to our development group.

Considering that it takes me about five minutes to write an email and another two minutes to read one, you can see it’s much more efficient for me to make a phone call in these kinds of situations.  In addition to saving my time (and the second party’s), it’s also easier to ask questions and give feedback to make sure we’re ‘on the same page.’   As you can see, it also takes us longer to reach agreement about a course of action when we rely too much on email.

By replacing email conversations with phone calls, I figure I’m saving about thirty minutes of mine and my colleagues’ time each time I avoid an “email conversation.”  Here’s my Number One Productivity Tip:  “Don’t ‘talk’ by email!” 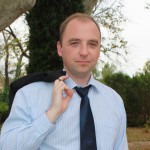 Vlad Zhamoidzik began working as programmer for Hypersoft in 2004 and, after 2 years, was promoted to his current Project Manager position.

The Leadership Skills To Be Learned From Parenting