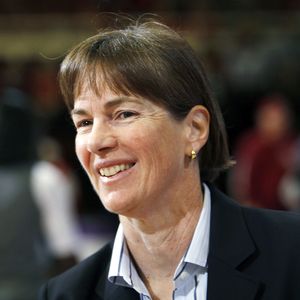 The Stanford University women’s basketball team almost always makes the Final Four. This year is no exception. While the team is called “the Cardinal” (the color, not the bird), they’re best known for another C word: consistency. Stanford is a consistent winner — and if you’re a business leader, you might want to ask yourself why.

The answer can be learned from looking at the impressive career arc of long-time coach Tara VanDerveer.

Tara VanDerveer is the epitome of a smart leader. If you study her rise to the top, you see a portrait of the practices and the mindset it takes to make it in any hyper-competitive arena — whether that arena is the basketball court or the boardroom.

In my book, I zeroed in on VanDerveer’s single-minded focus and relentless pursuit of the skills and knowledge that led to her becoming the fourth most winning women’s basketball coach in NCAA history. Her path to greatness exemplifies “smarts” — not in terms of IQ or academic credentials, but of hard work, perseverance, resilience. Grit.

In business, smart means being wily, clever, and capable enough to survive good times and bad — to adapt quickly to changing markets and win more than you lose. VanDerveer is smart like that because she forced herself to do the things that allowed her to become smart.

As “The Soft Edge” describes, those “things” included hours and hours (and more hours) of observing, listening, learning, practicing, repeating — and doing it day after day after day.

So let’s say you’re a business leader who wants to become the “VanDerveer” of your industry. How do you develop the right qualities in yourself? How can you become a smart, adaptable leader? Here are a few hints from Karlgaard:

From a very young age, VanDerveer spent countless hours watching basketball teams of all ages and skill levels. She continued this habit throughout her career — watching teams practice and taking notes, notes, and more notes. It’s this kind of total immersion in the fundamentals of your field that allows you to master the knowledge and skills to put yourself a cut above the rest.

Consider the ten-thousand-hour rule made popular by Malcolm Gladwell in “Outliers” — the notion that expertise and success is a matter of practicing (and practicing some more). In the case of smarts, it’s not just practicing; it’s also observing, listening, and learning.

Intelligence is not just a thing we get from our parents; it’s a continual process that’s affected by our own experiences and associations. Successful people just are more tenacious in seeking out those opportunities to accelerate their learning.

2. Seek out the masters in your field.

VanDerveer studied Bobby Knight. As a student, she watched Knight coach every single Indiana University home game and every practice during Indiana’s greatest season. She would arrive each day and sit in the stands, a few rows behind the bench. Day after day, she showed up like that to watch the Hoosiers play or practice. She kept her eye on Coach Knight. She studied him closely and took notes — until they were bulky enough to fill multiple metal file drawers.

You can do the same. Just approach the smartest person you know and ask him or her to mentor you.

People are surprisingly generous with their time. They want to help. They want to make a difference by passing along knowledge and sharing the expertise they’ve developed during their ten thousand hours.

3. Put yourself in situations that require “grit.”

In other words, do the hard, scary stuff that no one else wants to do. Do it over and over again. Chances are no one is going to make you do these things — so you have to make yourself. This is the heart and soul of the kind of self-regulated learning that VanDerveer practiced.

The smartest people in business are those who regularly put themselves in situations that require grit. These acts of courage accelerate their learning through adaptation. Salespeople who make more calls, for example, will almost always outperform those who make fewer calls. And it’s not just because the act of making the calls mathematically raises the chance of success.

The more frequent callers, by facing up to the gritty task of making a call, put themselves on a faster learning curve. They more rapidly learn what works and what doesn’t. They more rapidly learn techniques to overcome rejection. Thus, their success yield will improve. The act of making lots of calls also develops self-regulatory skills such as self-discipline and delayed gratification.

4. Look for ideas you can steal from other fields.

Borrowing from lateral fields can give you a real advantage over others who might not think to leave the “ivory tower” of their own industry. VanDerveer doesn’t limit herself to basketball. She watches football practices and water polo practices. She talks to coaches and gets ideas. In fact, after she arrived at Stanford in 1985, she looked up Brooks Johnson, a track coach at the university — who, as it happened, had also been a world record holder and an Olympic coach.

Johnson had VanDerveer bring the basketball team down to the track so they could work on their foot speed and vertical jump by doing things like toe raises, lunges, short sprints, and barefoot training in the grass. It got results — VanDerveer reported that some kids improved their vertical jump eight inches in three months.

One thing is clear: More than anything else, smart leaders just try harder. If you’re willing to do the work it takes, you can — no, you will — become one of them.

All of this takes time. It takes persistence. It takes getting out of our shy shells and reaching out to those who can teach us, putting ourselves on the line, and opening ourselves up to rejection. Those are tough things to do. But they’re worth it — and more than ever in our unforgiving business climate, they’re just the price of success.

Rich Karlgaard is author of “The Soft Edge: Where Great Companies Find Lasting Success“. He is also the publisher of Forbes magazine, where he writes a column, Innovation Rules, known for its witty assessment of business and leadership issues. He has been a regular panelist on television’s Forbes on FOX since the show’s inception in 2001. Karlgaard is also a serial entrepreneur, having co-founded Upside magazine, Garage Technology Partners, and Silicon Valley’s premier public business forum, the 7,500-member Churchill Club.