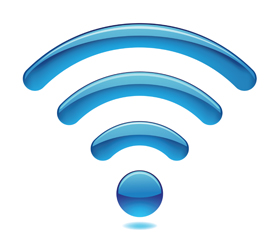 The new wireless 802.11ac standard, or “Gigabit Wi-Fi,” uses new technology to launch wireless data rates into the stratosphere. Gigabit Wi-Fi will take the 802.11n standard, which enabled 450-Mbps data transmission, and raise the rate to as much as 6.93 Gbps on an eight-stream wireless device. Although the new standard has great implications for wireless network speed, organizations making the switch will need to update their wireless network security approaches.

If your company is still using 802.11a/b/g devices and you’re ready to upgrade to a faster network, then purchasing 802.11ac devices makes sense. However, if you’re using 802.11n devices, consider taking a “wait-and-see” approach before upgrading. Let other organizations flesh out the network security tools and techniques that come with the 802.11ac, and then adopt those best practices. Unless you have a sophisticated in-house security team, you may not want to break new security ground on your own.

Wireless network transmissions in the 802.11ac standard use the 5GHz range as opposed to the 2.4GHz range most wireless devices use today. Since the 5GHz band is less crowded, wireless signal interference is reduced. Thanks to beam-forming technology, the range limitations of the 5GHz space are reduced. Instead of emitting an omni-directional signal around each access point like previous wireless technologies, 802.11ac sends a direct beam from the access point to a specific device.

The first 802.11ac devices rolled out last summer, and they support three data streams on 80MHz channels for maximum data speeds of up to 1.3 Gbps. The next phase of the 802.11ac rollout will offer MU-MINO tools; instead of waiting in a queue until the previous user’s transmission has completed, MU-MINO can support up to four simultaneous transmissions using multiple antennas. Once the standard has been deployed, users will see both benefits and drawbacks, including:

To ensure security when switching to 802.11ac devices, organizations need to increase their scanning for rogue access points in the 5GHz range as well as in the old 2.4GHz range. They’ll also need to monitor the new 80MHz and 160MHz channels. Increased network speed means better data transfer for users, but it also means faster malicious traffic if a hacker gets into the network. It also means hackers can extract data more quickly.

Some experts speculate 802.11ac, thanks to beam-forming, will be tougher to hack. If attackers can’t penetrate the network signal, then they can’t set up man-in-the-middle, Reaver (brute force) or WPA/WPA2 attacks. However, there is some concern than 802.11ac will hide packet issues from packet analyzer programs like Wireshark and Airmon-ng, which may allow some malicious traffic into networks.

Hold Off for Now

The good news is your legacy 802.11n equipment will continue to work, so you don’t have to worry about making an immediate switch to 802.11ac. Let other organizations make the switch, and let them handle the introductory security issues and infrastructure challenges that come with making the upgrade. By observing them, you’ll get a better idea of how to plan for and budget for infrastructure upgrades. You’ll also have a head start on potential security challenges when you eventually make the 802.11ac switch.

Why Is Personal Debt On The Rise In The USA?