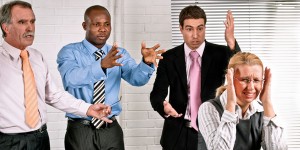 Conflicts and disagreements are a regular part of life, work, relationships and even self-interaction, and everyone approaches the issue a little differently. While few people find conflict pleasant, when conflict is managed well the negative aspects of a disagreement will end up being limited, while the positive aspects will be emphasized. Understanding the various approaches to conflict management can be enlightening because how someone engages in conflict can affect the types of resolution or outcomes a disagreement yields,

After all, a willingness to understand your conflict management style is an essential component of good leadership; while much of how someone engages in conflict is due to personal temperament and personality, identifiable styles do exist. Here are a handful of the primary styles — first described by Kenneth Thomas and Ralph Kilmann in the 1970s — people utilize in conflict management and what results they usually achieve.

When people make use of a more competitive style of conflict management, they know their position well and make a firm stand to defend it. Often, people who engage in a competing manner of conflict do so from a position of power, regardless of whether the power comes from rank, position, job title, expertise or their ability to persuade. While a competitive style can be difficult to engage, in emergencies or in situations when a decision needs to be made quickly a competitive approach can be an efficient means of solving a disagreement. Unfortunately, a competitive style can also leave those who do not get their way feeling undervalued and disregarded, especially if it is employed in situations that are neither urgent nor dire.

When people engage in a more collaborative way of resolving conflict, they aim to acknowledge and meet the needs of everyone involved in the dispute. Collaborative conflict managers can be just as assertive as someone who is more competitive; the difference lies in the fact that they seek a solution and resolution to satisfy everyone involved. When multiple viewpoints are present and the people involved need to continue to work together, a more collaborative style of engaging and disarming conflict can be highly desirable. It just may take a bit longer than some of the other methodologies.

While it may seem similar to collaborating, compromisers focus on the overall solution over individual desires. A compromiser does aim to keep everyone’s position in mind, but instead of working to satisfy everyone, she aims at partial satisfaction. In a conflict driven by compromise, every party is expected to sacrifice something in order to get what they want. A compromise can be a helpful step in the right direction when two equal parties are engaged in a conflict and have very different opinions, as long as each side recognizes the cost of conflict is higher than the cost of sacrifice.

A more accommodating style of conflict management occurs when someone is willing to meet another’s demands or needs at the expense his own. An accommodator is willing to give in when the other party is unwilling to do so. However, because of this willingness he can also be persuaded to abandon his position at too high a cost to himself or his cause or organization. People who employ this style tend to be very cooperative but less assertive than people who employ the previous three styles. Accommodation is highly valued when peace must be achieved at all costs or when one party clearly values an outcome more than the other.

Avoiding is the least assertive of all the styles of conflict management; when someone avoids conflict the result is often a delegated or delayed decision, coupled with an elaborate attempt to negotiate away from hurting anyone’s feelings. When there is no way to win a conflict or when the conflict isn’t worth having, avoiding the conflict can be wise. However, avoiding tends to be a weak approach. Most of the time, avoidance will just make the parties involved more entrenched and less willing to cooperate, and as such, it should be utilized rarely.

Conflict is a consistent fact of life. How conflict is managed will have a large impact on the way it affects those involved, regardless of who wins and what concessions are made. Know the style you naturally gravitate toward and develop the rest; a mixture of conflict resolution styles will lead to the most successful conflict management.