By Sarah Lahav, CEO of SysAid

Feedback is a powerful tool, it helps to guide, measure and motivate people towards achieving their goals and those set for them by managers.

Giving positive feedback is simple but delivering negative feedback in the wrong way can cause anger, demoralization and defensiveness.

Here are my top tips for giving effective negative feedback:

Make absolutely sure that the person you’re giving negative feedback to is deserving of it and that the issue isn’t because of bad instruction, faulty processes or someone else’s mistake.

When a person receives regular negative feedback they become apathetic and will frequently stop trying to improve their behavior as they feel it will make little difference.

If you find you’re making negative feedback an individual on a regular basis there is clearly a bigger issue that needs to be addressed.

3. Don’t Save Negative Feedback Up.

Feedback is all about modifying behavior, if you give too much feedback in one go the person is likely to become distracted and unsure of which bit of advice to focus on.

Leaving feedback to a later date will also make it difficult to pinpoint where and why an issue occurred.  Deal with each issue as it arises.

This can work really well in some cases but with certain people the compliment part will be the only part they remember.

Make sure you know who these people are and tailor your delivery accordingly.

5. Do It Face-to-Face Wherever Possible.

If you don’t like confrontation you may be tempted to send your feedback out in an email.  The absence of tone in emails can leave you open to the recipient inferring something that isn’t there especially if they are already feeling vulnerable or defensive.

Telephone is better but will still rob you of the opportunity to display an open and friendly demeanor, hopefully putting the recipient at ease and making the whole process smoother.

6. Ask For A Self-Assessment.

Most people will already realize when their work is sub-par or they have done something wrong.  Give people the opportunity to own up to it or help them to figure out for themselves what went wrong by asking their opinion of the event.  This also gives you another chance to ensure that their version of events matches with your own.

If people think that their thoughts and feeling are not being listened to they feel separate.  The aim is to give criticism in a way that adjusts the behavior but continues to make the person feel connected to you, their team and the company.

Listen carefully not just to the words that are being said but also to all the non-verbal information such as tone and gestures to ensure that you are getting the whole picture.

8. Ascertain the Basis of the Problem.

Ask probing questions to help gain perspective into the cause of the issue.  If you’ve listened carefully enough you may well have already uncovered why the issue occurred but it may help the other person to discover for themselves how their actions may have attributed.

Agree on an action to be taken to help ensure the issue does not reoccur, telling someone that they have done something wrong is useless without giving them the opportunity to do better.

It is also useful to set dates to follow up.  This will give the person time to digest the information you have given them, accept the criticism and recover from any injured pride or anger they may have experienced.

10. Be Willing to Accept it Yourself.

Everyone expects feedback to come down the chain but some of the most useful insights you will gain to your performance are from the people you manage.

Create a culture of trust so that people feel able to come to you with their observations, praise and criticism.  Most of all accept it in the way you would like others to accept it from you; with appreciation, reason and humility. 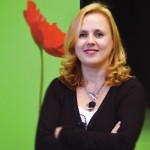 As the company’s first employee, Sarah Lahav has remained the vital link between SysAid Technologies and its customers since 2003. She is the current CEO and former VP of Customer Relations at SysAid – two positions that have fueled her passion in customer service.