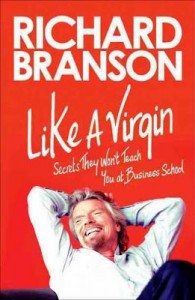 Everybody knows Sir Richard Branson, founder of the Virgin Group.

With an estimated net worth of US$4.6 billion, Branson is financially successful beyond anybody’s wildest dreams. His Virgin Group of 400 companies hires some 50,000 employees around the world, generating over £15 billion in revenue last year. The highly diversified conglomerate includes businesses in travel, banking, music, mobile services, Internet, film, video games, and most recently space tourism.

Unlike other billionaire bosses, however, Branson is unabashed about pulling outrageous publicity stunts. Moreover, his unconventional yet highly admirable methods of starting, running and investing in businesses weren’t learned from universities. In fact, Branson dropped out of school at the tender age of 16 to start his own magazine business. What then are the secrets behind his unparalleled success?

Well, the answers to this (and more) can partly be found in “Like a Virgin: Secrets They Won’t Teach You at Business School“. Warm and whimsical, Branson’s book is broken up into many bite-sized nuggets of business and managerial wisdom, gleaned through his years of successful serial entrepreneurship.

Let me now highlight some of its key themes.

As a serial entrepreneur, Branson is well known for starting myriad businesses in seemingly unrelated fields. After all, he did venture into opening Virgin Atlantic (an airline) after his initial forays into music. While risk taking is part and parcel of entrepreneurship, Branson also advises readers to protect their downside. In the case of Virgin Atlantic, for instance, he negotiated with Boeing to lease the fledgling airline’s first plane for 12 months first rather than purchase it outright.

Adopting a “David versus Goliath” approach in business, Branson chooses consumer industries where he can challenge incumbents by providing better customer service, greater value and more fun. Making mistakes and failing is par for the course. Case in point: Virgin Cola which fought valiantly but lost against beverage juggernauts Coke and Pepsi.

1) Stay on Target – Start-ups should be focused on their goals and strategies, establish clear timelines, and not get sidetracked by plans for future versions too early in the game. Looking two to three years ahead is best – not anything beyond that.

2) Be realistic about costs – This is a cardinal rule for any business to stay afloat and not be swept away by mounting bank loans. Here, Branson advises one to work out one’s budget and then add 75% or even double it to provide a more sombre picture.

3) Hire the people you need, not the people you like – Despite being such a friendly guy, Branson is careful about hiring friends and family members into his business. Rather, he seeks to “hire a core team of smart people who already know the industry and its inherent risks.”

4) Know when to step down as CEO – Espousing his view that CEOs should be seen and not heard, Branson leaves the daily operations of business to his managers. While he is always involved in launching new businesses, he chooses to relinquish the reins once the new management team begins to form.

With a flair for the theatrics, Branson is a media magnet. Acting on the advice of his mentor Sir Freddie Laker, he milked his personal image to great effect when launching any new businesses. For example, Branson dressed as a bride when launching Virgin Brides several years ago. More recently, he dolled himself up to be an Air Asia stewardess after losing a bet to his business partner and friend Tony Fernandes! 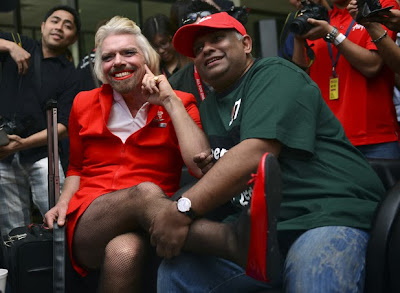 Naturally, the most asked question of Branson is how the name “Virgin” came about. The result of a humble internal brainstorming session, the Virgin brand was home-brewed by Branson and his team. Wearing a self-deprecating sense of humour on its sleeve, Virgin is about offering great customer experiences while being irreverent.

With the mantra of underpromising and overdelivering, Virgin firmly believes in providing superior customer service while delighting customers with unexpected kickbacks. This means being open and transparent about costs (as in the case of Virgin Mobile), and empowering staff to take the initiative to arrest customer failures on the spot. The key here is to ensure that frontliners have all the tools they need to serve customers, such that “the customer always thinks that we are right”.

Celebrating small and big wins is a big part of Virgin’s culture. This tradition started way back from its humble beginnings as a single record store. The fact that Branson himself works from home (his “office” is a hammock overlooking the Caribbean) and shuns long-sleeved shirts and ties reveals the organisational “DNA” which Virgin has.

Passionate about protecting the environment and giving a hand to poor communities around the world, Branson established Virgin Unite as a foundation for Virgin’s philanthropic causes. With a strong interest in securing alternative energy supplies for the group’s sprawling businesses, Branson regularly invests in clean energy sources like wind and solar power, biofuels and other renewable sources of energy.

Despite being the big boss of a large business group, Branson does not impose his will upon his senior managers. Wherever possible, he listens to their ideas and empowers them to make the daily decisions needed to run his businesses smoothly like well-oiled machines. A keen advocate of management by walking about, Branson enjoys talking to customers to find out more about their experiences with Virgin’s various services. He makes it a habit to bring along a small notebook to jot down learning points and follow up areas (a practice that I personally found very useful too).

With a deep appreciation for his people, Branson makes it a point to empower staff on the frontlines while equipping them with the right skills and resources. Training is a key aspect of the Virgin way, and this is cascaded down to the different levels and business units.

As you’d imagine, formalities are shunned in Virgin – in fact Branson strongly encourages his managers to get to know their staff outside of the office. Innovative ideas are valued across the organisation, and employees are “caught” for doing something good (rather than bad).

Quoting from the book:

Relax and have fun, ask questions and listen. Ask your colleague what she sees as her area’s strengths and stumbling points, and listen to her thoughts on the challenges the business faces. Jot down anything that strikes you as worthy of follow up.

In summary, “Like a Virgin“ is a great read for anybody keen to know how a great entrepreneurial mind ticks. While it is clear that not everybody can be as dashing, charismatic and adventurous in spirit as Richard Branson, the lessons he teaches are certainly applicable in most organisations today.