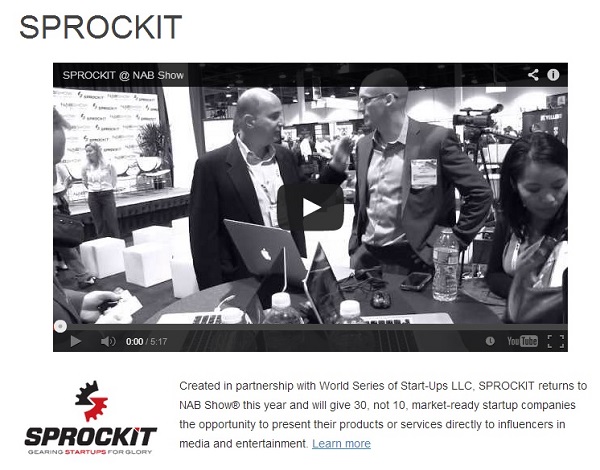 SPROCKIT 2014, a year-round program by NAB Show and World Series of Start-Ups that showcases elite emerging companies in media and entertainment and introduces them to industry influencers and decision-makers, is again looking for startups to participate in the coming year’s program.

Returning to NAB Show for the second consecutive year, SPROCKIT 2014 will triple in size and accommodate up to 30 startups this time. Selected startup companies are promised to have “intimate access to top executives in media and entertainment, the opportunity to pre-schedule private meetings with industry influencers, and time to present their product or service to potential customers, partners and/or investors”. Following the NAB Show, SPROCKIT companies and select industry leaders will collaborate throughout the year in SPROCKIT Sync, an exclusive media and entertainment community focused on bringing the most innovative products, services and revenue models to market.

“After a successful inaugural year that brought dozens of innovators together, we’re delighted to host SPROCKIT again at the 2014 NAB Show,” says Gordon Smith, president and CEO, NAB. “Shining a spotlight on the leaders of tomorrow is one of the many ways NAB Show is shaping the future of media and entertainment.”

“SPROCKIT takes the most innovative, market-ready startups and provides front-and-center visibility and fosters relationships with industry icons,” adds Harry M. Glazer, founder and CEO of World Series of Start-Ups, LLC and the creator and co-producer of SPROCKIT. “This year’s program is no exception. With the new open application process, we’re giving more innovators the opportunity to change the future and join an esteemed group of SPROCKITalumni and industry-leading partners.”

“I truly believe that SPROCKIT can be a transformational hub for the industry,” says SPROCKIT 2013 alumni, Sue Fennessy, founder and CEO of Standard Media Index. “With so much clutter and noise in both the media and technology sectors, it is critical to have an unbiased central zone that can highlight and nurture businesses that will shape our future.”

To become participate, a startup company must have market validation and must prove the potential to significantly impact the media and entertainment industry. Interested companies should submit an online application by November 22, 2013 on sprockitglory.com.