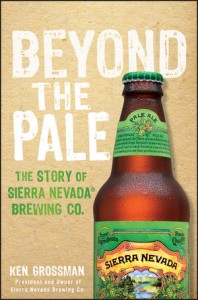 We often hear of so many stories how enterprising individuals turned their hobbies into multi-million dollar businesses that sometimes we tire of and get numb on them. But once in a while you do stumble upon a tale of an epic entrepreneurial struggle against all odds that revive your faith in the story of human resilience – “Beyond the Pale: The Story of Sierra Nevada Brewing Co” is one of those.

Written by Sierra Nevada Brewing Co‘s president and owner Ken Grossman, “Beyond the Pale” tells the story of the Chico, California-based craft brewery’s early days from before its official founding to its current place as America’s sixth largest brewing company (it brewed 786,000 barrels of beer in 2010), and further cementing its epochal role as one of the main drivers in America’s craft beer movement over the past two decades.

It may be sitting rather pretty right now in America’s beer market rankings, but Sierra Nevada sure didn’t start out that way. Grossman and his founding partner Paul Carmusi never really did have the money required to start the brewery, borrowing heavily from friends and family. Most of the equipment in Sierra Nevada’s first brewery facility was either scrounged, bought second-hand, and even scratch-built (most, if not all, of it by Grossman himself). Worse yet they weren’t quite sure if there was even a market for their hoppy and bitter pale ale, considering that the American consumer of the day preferred light, near-flavorless lagers heavily marketed by big beer companies.

“Beyond the Pale” is not an easy read. Don’t get me wrong – it is quite superbly written, but contains many terms and descriptions that will be alien to those not familiar with the making of beer – sparging, anyone? – and will definitely bore those not quite so interested in brewing. Even so, the very human story of how Grossman and Camusi overcame their many challenges, and riding the wave of change in the beer industry, will appeal to most with great examples on the different facets in building a business. For example, Grossman covers issues that range from fostering talent and employee wellness to scaling and working with legislation.

But if you’re a huge craft beer fan, a passionate home brewer or an industry professional, “Beyond the Pale” is a literal treasure trove of information about how the industry works. You’ll read about Grossman’s focus on sustainability, nonconformity, following one’s passion, and doing things the right way.

If you think you know a lot about the US craft beer movement, think again – Grossman knows more. He’s lived the near entirety of it. Like Sam Calagione, founder of Dogfish Head Brewery (and who wrote the book “Brewing Up a Business: Adventures in Beer from the Founder of Dogfish Head Craft Brewery“), Grossman’s built his dream – and successfully at that – on it.

Savor “Beyond the Pale” like you do a well-built, quality Sierra Nevada beer.