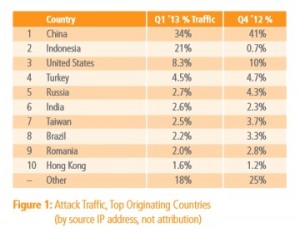 Akamai just released its State Of The Internet report for the first quarter of this year, and Indonesia has gotten itself into the report for mostly the wrong reasons.

When it came to attack traffic – defined as malignant Internet traffic malignant traffic such as Distributed Denial of Service (DDoS) attacks – the fourth most populous nation in the world barely ranked at all in last year’s 4th quarter report. This year the Southeast Asian nation surged to an incredulous 2nd place, contributing around 21% of malignant web traffic observed by Akamai. China kept its position as the single-largest volume source of observed traffic with 34% of the total (down from 41% in the previous quarter), while the United States dropped from second to third with 8.3% of observed traffic (down from 10% in the previous quarter).

That’s right: more than half of the total observed attack traffic originated from two countries – China and Indonesia – alone (see chart on right). That’s out of the total 177 unique countries/regions observed by Akamai during the first quarter of 2013. According to the Internet content delivery provider, Port 445 (Microsoft-DS) continues to be the most targeted port in the first quarter, receiving 23% of observed attack traffic. Port 80 (WWW HTTP) was second at 14%, with a majority of these attacks observed to be originating from Indonesia.

In the first quarter of 2013, Akamai customers reported 208 attacks, up slightly from the 200 reported in the previous quarter. Of those attacks, 35% targeted Enterprise customers; 32% were focused on Commerce customers; 22% on Media customers; 7% on High Tech customers; and 4% targeted Public Sector customers.

Global average peak connection speeds increased 9.2% to 18.4 Mbps during the first quarter of 2013.  Hong Kong remained in the No. 1 spot at 63.6 Mbps, an increase of 9% over the previous quarter.

“This quarter’s State Of The Internet report shows continued positive growth in terms of Internet and broadband adoption worldwide. We have seen overall increases in average and peak connection speeds along with greater broadband penetration on both a quarterly and annual basis,” says David Belson, the report’s editor. “However, the levels of malicious activity we’ve observed show no signs of abating, as evidenced by the ongoing rise in DDoS attacks. This reinforces the continued need for vigilance by organizations that are conducting business and maintaining a presence on the Internet.”

Here’s an infographic that summarizes the data: 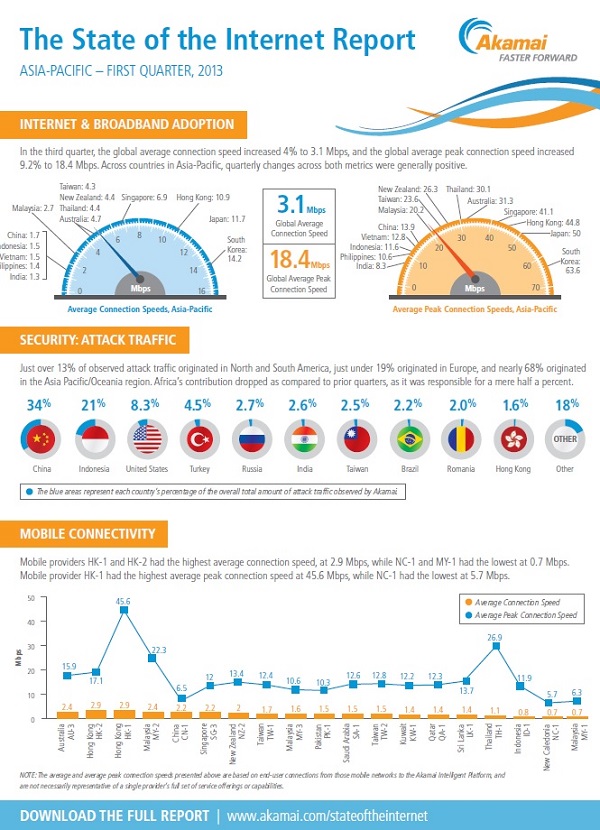