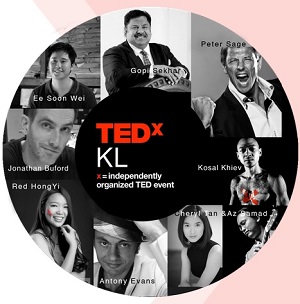 The term “life hacking” originally arose in the 1980s among computer programmers devising and employing tricks to cut through information overload. Today, that definition has extended to include any productivity trick, shortcut, skill, or novelty method to increase productivity and efficiency in all walks of life; in other words, anything that solves an everyday problem in a clever or non-obvious way.

This year’s TEDxKL – to be held on 3rd of August at the Mid Valley Exhibition Centre, Kuala Lumpur – will take an in-depth look at this trend. The event will see an interesting and eclectic list of speakers who will no doubt demonstrate some innovative, perhaps even radical, ideas. Among them are notable personalities such as:

– Peter Sage, the Founder of Space Energy, a multi-billion dollar project focused on the generation and transmission of clean energy and commercialisation of Space Based Solar Power. A well-known entrepreneur who launched, operated and brought to success over 15 start-ups before the age of 30;

– Antony Evans, who – along with a group of innovators coming out of Singularity University – launched a Kickstarter campaign to create Glowing Plants, putting forward the idea of replacing street lamps with glowing foliage in what they call the “first step in creating sustainable natural lighting”;

– Red Hong Yi, a Malaysian-born architect who was inspired to create art using everyday materials she found in China as her medium. Known as the artist who “loves to paint, but not with a paintbrush”, her work has been featured by media around the world including Huffington Post, Wall Street Journal, ABC, CNN and NBC. Hong Yi was named one of Esquire magazine’s 12 Brilliant Malaysians and given the Perspective Global’s 40 Under 40 Designers award; and

TEDxKL is currently in its 5th year, and has grown from an humble audience of 80 people in 2009 to over 800 in 2012 in its aim of bringing together people who want to leverage ideas, technologies, design, and education to help create a better future and support innovation in the local community.

Tickets for the event are priced at RM150 and are available online at www.tedxkl.com.  A limited number of tickets are also sold at the venue for walk-in participants at RM180.