It looks like the Singapore worker has a big and growing appetite when it comes to salary expectations. In a flash of the blindingly obvious, the recently released bin-annual jobsDB Asian Consumer Market Survey – which canvassed the opinions of 1,893 participants from Hong Kong, Indonesia, Malaysia, the Philippines, Singapore and Thailand – revealed that workers in Singapore, as well as in Hong Kong, are becoming more ambitious and seeking out new, higher paying job roles, even in their later years. 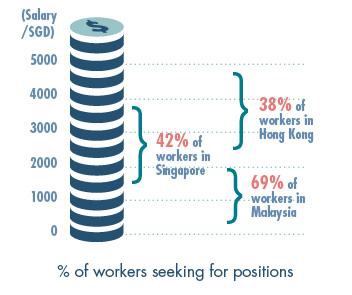 The study also shows that there was a significant increase in respondents from Singapore searching for roles in the 5,000 to 7,499 SGD salary range, up 7% from last October. 69% of neighboring Malaysian job seekers however, sought a salary between 400 to 2,000 SGD.

From October 2012 to present, the majority of Singapore job seekers saw a small 3% decrease in the 20 – 24 age bracket; however there has been a 4% increase in the 45 – 49 age bracket, a trend that was mirrored in Hong Kong with a smaller 2% rise (see graphic below). Conversely, there has been an 8% decrease in Malaysian job seekers between the same age bracket. This increase across both Singapore and Hong Kong suggests that people are seeking out higher paying job roles to manage approaching retirement – this can likely be attributed to an aging workforce facing cost pressures in both countries with their notoriously high costs of living.

“In Singapore, we’ve noticed the developing trend around the demand for higher paying job roles amongst the older age range, which leads us to believe that Singapore workers are not wholly satisfied with their current role and salary and are looking for change in the lead up to their impending retirement,” explains Angeli Beltran, managing director of jobsDB Singapore and Malaysia.

Interestingly, the survey detected a relative decline in the number of Singapore respondents seeking roles in accountancy from 11% in October 2012 to 6%. The number of Singapore job seekers looking for roles in banking and finance has also seen a slight decrease of 1%, while in Hong Kong the same sector received a 2% decrease (see below), which may be a sign of the uncertain global economic outlook, although it’s unlikely to harm the status of both Asian financial hubs. In Hong Kong, education has become the most popular sector for respondents – 13% in October 2012 to 12% at present.

But while Singapore workers continue to clamor for better pay and job prospects, the larger question remains – do they actually deserve their wages?