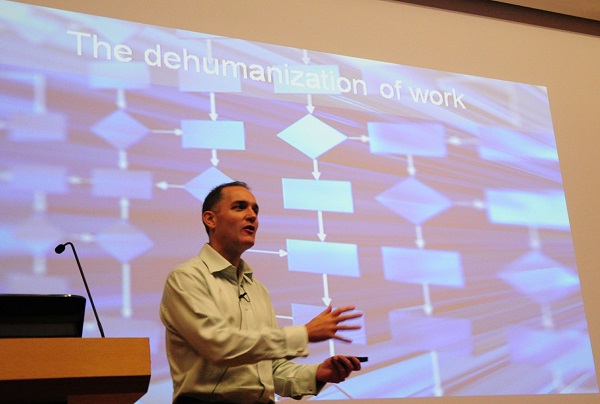 The age of machines have arrived, and the future of the workplace will continue to change as various factors – increased automation, changing social demographics, heightened connectivity amongst others – all combine and see technology steadily displace labor. But while that may sound like doom and gloom, futurist Ross Dawson (above) says that the new emerging landscape is also littered with opportunity.

And the space where humans can excel? Crowds. Or more specifically, being able to tap on the wisdom of the minds of many, he says. Dawson (above), the author of “Getting Results From Crowds: The definitive guide to using crowdsourcing to grow your business“, argues that the potential and opportunity for individuals and organizations lies in openness and creativity by the crowd. And that’s the reason why crowdsourcing has been a growing trend.

Dawson was speaking at Crowdsourcing Week, an inaugural event in Singapore which aimed to bring together a diverse audience from various industries – creative, government, startup and technology – and bring about discussion on the issues surrounding crowdsourcing and how that can apply in their individual environments.  “We wanted the inaugural conference to bring together speakers, practitioners and delegates to learn and discuss about how crowdsourcing and open innovation can play a key role in driving business successes, whether it’s about increasing productivity or revenue growth,” says Epi Ludvik Nekaj, CEO and founder of Crowdsourcing Week. 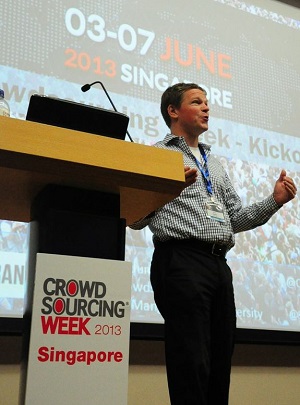 The week was kickstarted by an opening address from Sean Moffitt of Wiki Brands (left), where he shared insights about the growth of the crowdsourcing industry, how meritocracy can drive the trend, and some of the industries that will be impacted by crowdsourcing including education, finance and retail.

Moffit provided examples of crowdsourcing across the world including “Veronica Mars”, a movie that raised $2 million in funding in one day through crowdsourcing (it finally hit some $5.7m total in funding on crowdfunding platform Kickstarter) and “Main Street Matters”, where paint manufacturer Benjamin Moore used crowdsourcing as part of its marketing campaign to decide on the colors that would decorate certain main streets in the United States.

The week included various other sessions that included talks from technology leaders like Microsoft and Google, sharing information about fast moving trends, products and policies that are fueling these new disruptive changes. For example Michael Thatcher, Chief Technology Officer – Public Sector Asia at Microsoft, provided some insights about how shared data benefits transparency and participation, and how that gives rise to new products and services.

And while crowdsourcing by and large have been relatively slower to take off in Asia, crowdsourcing service providers are starting to see this region as the next step of growth. Freelance staffing site Elance.com‘s Kjetil Olsen, its vice president for Europe, was in town for Crowdsourcing Week and Echelon 2013, but was also looking for opportunities to expand the platform’s reach in Southeast Asia. “Asia and by extension, Singapore is one of our key regions, representing nearly a third of our growth and revenue. We are seeing a shift in workplace trends towards an elastic workforce and we want to be part of that story in Asia,” Kjetil explains.

“Elance believes in the power and nature of the online crowd. Our business model is built around connecting clients and talent through a marketplace. In Singapore this year, Crowdsourcing Week was one of the channels we used to raise awareness and inform the audience about how they can utilize Elance to help accomplish business objectives,” he adds.

Crowdsourcing Week also comes on the heels of news that Singapore-based startup Pirate3D raised its target of US$100,000 in a mere 10 minutes for its 3D printer, and to date has hit over US$700,000 with still 22 days to go.