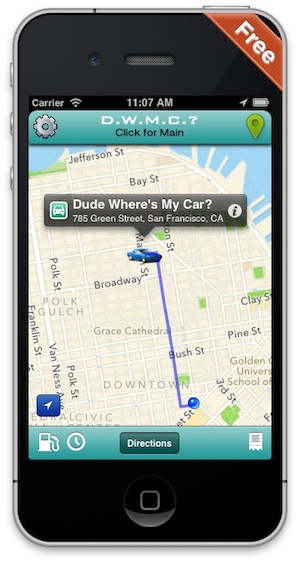 Do you remember the 2000 movie called “Dude, Where’s My Car?” starring a young Ashton Kutcher about two potheads who wake up from a night of partying and can’t remember where they parked their car? Well, now it’s an app.

If you find yourself often forgetting where you last parked your car, especially in an area in which you’re not too familiar with, this iOS app is for you.

Aside from using Google Maps or Apple Maps’ geo-location to mark and find where you park your car in the free edition, the pro version of the app also allows you to find nearby places of interest and even cheap gas prices nearby. If you’re the sort who always gets a parking ticket for not topping up your parking meter, there’s a feature that lets you set a parking meter alert directly from the app which will notify you when the meter is running low.

And if you’re really, really lost, there’s also another feature that lets hopeless you call a cab company as a matter of last resort.