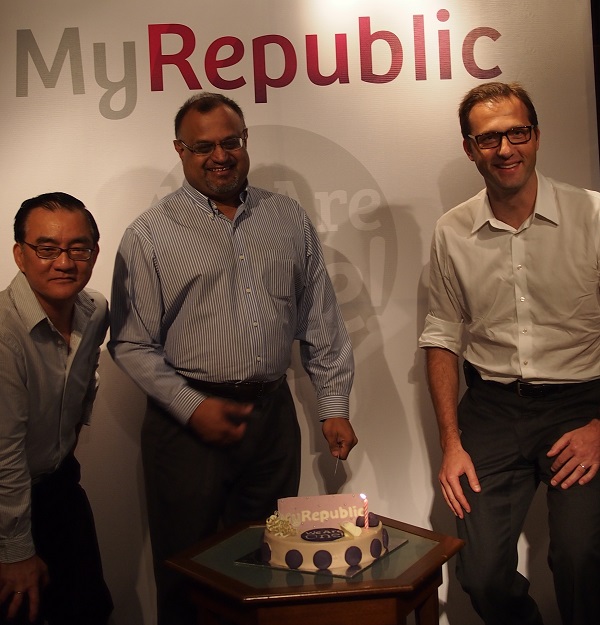 Being an industry-disrupting new company is always extremely challenging, and none more so if you’re looking at a highly-regulated one with just a small number of strong players like that of Singapore’s telecommunications industry. Largely dominated by SingTel, Starhub and M1, these three telecommunications providers have a near stranglehold on mobile, broadband, and mobile broadband services in Singapore.

But recent entrant Internet service provider MyRepublic, officially launched in February last year, has already established its position as the country’s fourth largest provider of such services. Broadband providers in Singapore have always been accused of unsavory practices like bandwidth throttling, and MyRepublic‘s service promise of unthrottled high-speed fibre broadband has seen users flock to it. A focus on optimizing online gaming experience – who especially need low latency speeds – by peering with game servers located overseas also established MyRepublic as the broadband choice for local gamers. It’s even introduced a contract-free – users don’t have to sign a restrictive, binding long term contract to use broadband services used by the incumbents that inflicted punitive damages on subscribers in the event they stop using the service – option that disrupted the market.

But the journey hasn’t been a totally smooth one, as its founders attest. The incumbents have fought back hard, in some cases copying MyRepublic‘s gaming product. “But simply bundling gaming accessories doesn’t make it a gaming product,” laughs MyRepublic CEO Malcolm Rodrigues, who adds that their focus on gaming came simply from “purely selfish self interest” with over half of their office avid online gamers.

There’s also been the broadband price wars that’s seen prices fall and incumbents’ service offerings enhanced sparked off by MyRepublic‘s initially better offerings – much to the delight of consumers. MyRepublic, as many online influencers attest in forums and other sounding boards, has helped changed the market for the better. As far as customer service is concerned, Rodrigues says they “make it a point to make customers love us, not just make customers hate us less”..

It’s certainly a long way since Rodrigues and fellow co-founders and telecommunications industry veterans K.C. Lai and Greg Mittman sat around the latter’s dinner table at home a couple of years earlier wondering why the big incumbents weren’t doing more with Singapore’s Next Generation National Broadband Network. The idea of MyRepublic was then cemented, with the intention of leveraging on that new infrastructure – and at the same time, letting consumers know how they’ve been fleeced all this while.

It’s been a tough ride, but earlier this week, MyRepublic celebrated its first birthday.

As one of the smallest fish in the pond, the company knows that its larger competitors are gunning to threaten its survival. “We have to be constantly innovating,” says Rodrigues.

“We also expect to be copied continually,” he jokes, more than half seriously.

That drive for constant innovation is also the reason that MyRepublic has introduced a new service called Teleport, a VPN-like service that lets its users stream content from online services from around the world like Hulu, Pandora, Netflix and BBC iPlayer without the need for cumbersome traditional VPN methods. “An increasing number of consumers are getting their entertainment from online sources, shares Rodrigues. “They’re discarding their set-top box and traditional TV viewing habits for over-the-top (OTT) content delivery — a channel that lets them watch what they want, when they want, on which devices they want, and at prices dramatically lower than what they pay to cable TV providers.” And unlike traditional VPN workarounds, there’s nothing that’s required of the user to install – everything resolved on MyRepublic‘s back-end.

The fibre service provider revealed that they came up with this offering as they observed online video streaming usage soar from 17-percent to 45-percent of its total network traffic over the past year. They realized that with the ever-growing wealth of content providers online, the demand from customers for a quality fibre connection will likewise grow.

This is a huge challenge thrown at big fish Starhub and SingTel’s broadband TV services SCV and MioTV respectively. Rodrigues promises a wide and expanding selection of online entertainment sources enabled via Teleport, pending feedback from a free beta trial of Teleport for 1000 customers, current or new. The beta will start early April and end in June, with a full service offering offered shortly after. While the final pricing for Teleport hasn’t yet been resolved, MyRepublic executives say it’s likely to cost an additional S$5, above a regular broadband subscription.

When the founders of MyRepublic first bounced their idea for an independent fibre broadband service provider to industry peers those years back, many of them were skeptical that the Singapore telecommunications industry can ever be disrupted.

MyRepublic looks to be proving them wrong.