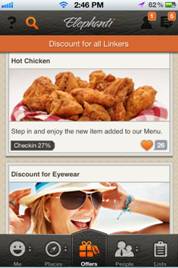 Brick-and-mortar businesses – large and small – are increasingly looking towards the online and mobile spaces to boost flagging retail sales. The problem, of course, is that many of them are traditional outfits with nary an idea of how to approach this challenge.

This trend has also sparked the onrush of online and mobile marketing startups eager to answer this need. From loyalty marketing marketing mobile apps to daily deal sites to online customer relationship management systems, an entire gamut of products and services have sprung up.

One such mobile marketing solution to recently enter the Singapore market is New York-based Elephanti, a mobile app that aims to help reconnect consumers with offline stores. The location-enabled service – available on both iOS and Android – works as a social platform, allowing merchants to create and maintain a virtual storefront and thus interact with existing and potential customers and thereby driving more traffic to physical stores. Shoppers are rewarded with discounts when they make a purchase and “checking-in” on the app.

“In an increasingly competitive retail landscape coupled with rising costs, Elephanti is a free app for both merchants and shoppers to engage on a social platform that will benefit both parties,” says Lalin Michael Jinasena, founder and CEO of Elephanti. Currently, we have just over 1,000 merchants onboard and we expect the number to go up consistently, with approximately 20 new merchants creating their profile each week.”

Interestingly, for merchants Elephanti offers a “pay per check-in” advertising model on the mobile app. Merchants pick what they choose to advertise, set a daily budget or cost per check in, and Elephanti will publish ads only if they match the user’s specific interests listed in their profile. Merchants who choose to advertise on the app will only have to pay when shoppers see the advertisement, walk into the store and physically check-in on the app.

Jinasena agrees with observers who say that people are changing the way they shop, with consumers increasingly using mobile devices to shop, and discover new stores and deals. “While many people research and create shopping lists before they go out to shop, (more and more) offers are posted real-time in our online world,” asserts Jinasena. “(At the same time) brick-and-mortar retailers are also feeling the crunch from the rise in online shopping and ‘show-rooming’, with many stores resorting to costly in-store displays or even having to close down.” These trends, he adds, pave the way for solution providers like Elephanti.

Will Mobile Marketing Be The New Daily Deal? 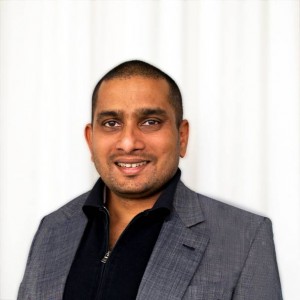 However, Jinasena does not believe that the flood of mobile marketing solutions into the market will lead it to the same fate that befell the daily deals industry.

“Further, with the existence of Groupon who has proved to be a huge competitor in the daily deals space, it makes it even harder on the various websites to stand out and succeed.”

But with the case of mobile retail apps, each offer differentiating features that appeal to different merchants. “The beauty of apps is that you do not necessary need the backing of a large corporation like Google to be able to succeed,” he insists. “All it takes is innovation and a commitment to constantly improve on your app and be able to deliver to your users and the chances of creating a successful app is highly probable.”

“Therefore, we do not think that there would be a consolidation in the mobile retail app market in Singapore in the near future.”