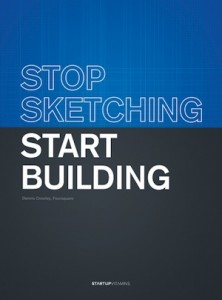 Hitting a rough patch and facing failure when you’re building and running a startup – and that’s going to happen relatively often – can be downright depressing.  Take it from the folks from StartupVitamins – its founders are a team of serial entrepreneurs who’s learned the hard way to the tune of eleven failed projects to date. Ouch.

That’s the reason why the Latvia-based company, part of the Draugiem Group, came up with the idea of providing a series of motivational posters with quotes from serial entrepreneurs and recognized leaders in technology who went through their own trials and tribulations. Startup founders can buy these posters with its words of inspiration from the likes of Larry Page and Steve Jobs to put around their homes and offices to remind themselves that the challenges they face aren’t totally unique.

“Running a startup is like being punched in the face repeatedly, but working for a large company is like being water boarded.” – Paul Graham, Y Combinator

“Timing, perseverance, and ten years of trying will eventually make you look like an overnight success.” -Biz Stone, co-founder of Twitter

If you’re feeling down and out, looking at one of these can give you the inspiration you need.