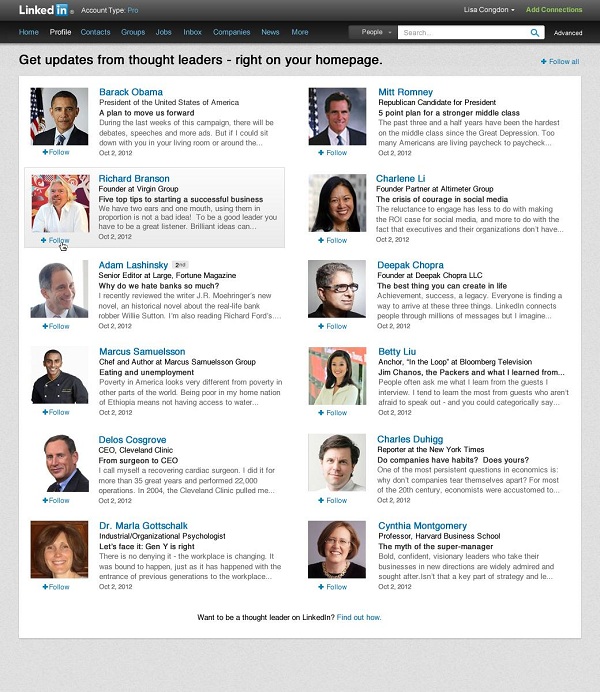 We all have at least a few thought leaders in various spaces that we look up to, whether it’s in the arena of technology, social media, politics or what-have-you. We’re also likely to already follow them on various social media platforms such as Twitter, but here’s another way to keep up with their train of thought – on LinkedIn.

The professional social network has been beefing up its social feeds (or timelines) of late, and earlier this week the company announced that members can now “follow” a list of global thought leaders, starting with 150 of the most influential and prominent LinkedIn members from various fields.

The list spans both globally-recognized thought leaders such as Barack Obama, Deepak Chopra, Guy Kawasaki, and many more; as well as industry-specific movers and shakers like Hollywood talent agent Ari Emanuel, entrepreneurship gurus like Michael Arrington and Joichi Ito, business luminaries like Richard Branson, and social media notables like Pete Cashmore. It’s a way to access to their knowledge and professional insights – from Richard Branson’s tips on starting a successful business to Marcus Samuelsson’s thoughts on eating and unemployment.

It’s a way to follow these thought leaders without having to actually connect with them, much like the ‘subscribe’ function on Facebook. You probably already follow them on some other network, but hey, there’s nothing stopping you from religiously following their train of thought on every social media platform, is there?