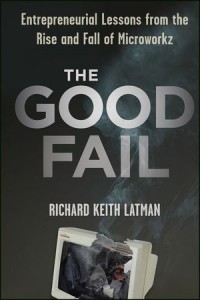 In the startup world we often hear that failure can be a good thing, but when you have failed as often – and as spectacularly – as Richard Keith Latman you’d seriously wonder about that adage.

After all, Latman has seen his startup company Microworkz go from the brink of tremendous success to being shut down, have himself enter personal bankruptcy and his personal life destroyed. He’s lost 11 jobs in 12 months, been sued by the attorney general of the state of Washington, and his name and reputation dragged in the mud. It’s enough to make anyone wonder if life is worth living.

Latman has chronicled that experience and the aftermath in the book “The Good Fail: Entrepreneurial Lessons from the Rise and Fall of Microworkz“. If you’ve never heard of Microworkz, the now-defunct small, Seattle-area computer company that sold low-cost PCs was once lauded for trying to get computers into the hands of those who couldn’t afforded its high ticket prices before. The introspective book is Latman’s side of the story as to how and why Microworkz failed. He highlights the litany of woes including excessive demand brought about by a PR move, litigation, partner defections and component supply issues finally led to the company’s very public shutdown, destroying Latman’s – who then was known as Rick Latman – life in the process.

It would be remiss if I didn’t point out that there are those who wonder if the account is fully accurate or question Latman’s motives for writing his autobiography.  But even if you don’t fully buy Latman’s side of the story, “The Good Fail” does carry many lessons for the startup entrepreneur. It’s a startling lesson in endurance and resilience, of getting trampled by bad news and having your feet taken out from under you, and yet getting up and dusting yourself off every single time. And the book does makes extremely absorbing reading. Reading it is like watching a disaster movie in the unfolding – you know there’s another tragedy just round the corner, which makes you want to keep turning pages.

Richard Keith Latman – now the founder of Latman Interactive and CEO/co-founder of iMagicLab, a Maryland-based software company focused on the auto industry – did go through a spectacular fail. But as long as we learn the lessons from his experience, Latman would probably call it a good fail.