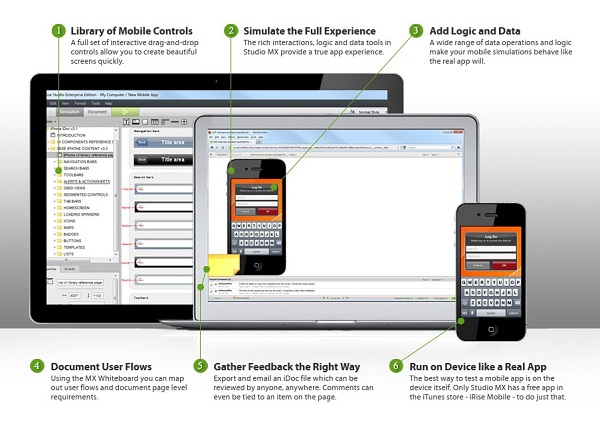 Say you’re an aspiring entrepreneur who has a great idea for an iPhone or iPad app, and you’re looking for funding from venture capitalists to kick start your way to success or convince a technical person to join you. Sure you can show them a business plan, but there’s nothing quite like showing them a prototype – except that you don’t have one, and don’t know how to come up with one. Here’s where something like iRise Studio MX comes in – the visual prototyping software allows you to build iPhone or iPad app prototypes that can nearly simulate an actual working version so people have a real idea of what your product is about.

The free iRise Studio MX uses a drag-and-drop user interface so you don’t need coding or scripting experience of any kind, and allows you to be able to put together a realistic prototype with working controls and basic navigation – or, if you’re advanced enough, add interactivity, business logic and input sample data – that you can use during an elevator pitch with a potential investor or employee. Prototypes can be run directly on the iPhone with iRise Mobile, a free app available in iTunes App Store.

“Imagine an elevator pitch where you could pull out your iPhone and show a potential client or funder a simulation that looks just like the app you want to create,” says Emmet B. Keeffe III, CEO and co-founder of El Segundo, California-based iRise. “That’s a total game-changer for most entrepreneurs; that’s what iRise Studio MX offers — and because it’s free, even up-and-coming innovators working in the next big garage startups can afford to compete on the strength of their ideas.”

“The continuing explosion of mobile apps confirms that lots of people have potentially great ideas for new apps,” says Keefe, adding that iRise Studio MX can help assemble a highly interactive prototype in a few hours – without coding – that “looks and feels good enough to ‘sell’ others on their ideas”.

iRise Studio MX is available for both Mac and Windows.

Top 5 Trusted Audio Transformers Supplier And How To Find One