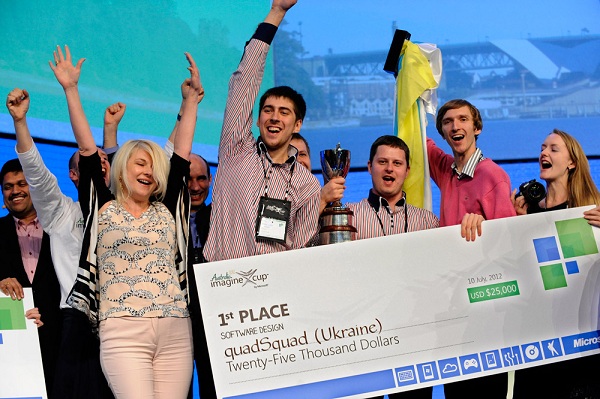 They came, they saw, and they – well, some of them, at least – conquered. The student teams from all over that participated in the 10th annual Imagine Cup have challenged each other and themselves with their technology innovation projects, and the winners have now emerged.

Taking top spot in the Software Design category is quadSquad from Ukraine, winning US$25,000 with its set of custom-designed sensory gloves and a smartphone application called ‘Enable Talk’ that allows the deaf to communicate verbally by translating sign languages into speech. Thailand team TANG Thai and U.S. team Drexel Dragons won the Game Design categories for Xbox/Windows and Phone respectively, with the Thai team developing a game focused on protecting the environment and preventing deforestation, while Drexel Dragons made a game that promoted elementary math education and problem solving. The latter teams each walked away with US$8,000.

Interestingly, quadSquad’s ‘Enable Talk’ wasn’t the only project that looked at enhancing the quality of life for the disabled. Some 23-percent of projects in the Imagine Cup this year were aimed at improving the lives of individuals living with disabilities. “We were inspired to help our friends who are hearing- and speech-impaired to have the ability to communicate like everyone else,” says Maxim Osika of quadSquad.

“Over the past 10 years, Imagine Cup participants have applied technology and minds to positively impact their local communities and change the world,” says Moorthy Uppaluri, general manager, Global Academic Programs, Microsoft. “Whether it’s using the cloud to aid in disaster recovery, inventing technology to make education more accessible to erase the digital divide or making it possible to diagnose medical conditions using mobile phones, the Imagine Cup has inspired students to imagine what once was considered impossible and make it real.”

The winning teams are:

Students create innovative software, service solutions and real-world applications that unleash the power of technology to benefit their community or, perhaps, the entire planet.

Students select one of two tracks (Phone or Xbox/Windows) to create games that not only are fun but also help to improve the world at the same time.

Aside from the core Imagine Cup Competitions, students were able to compete in five online challenges. You can find the full list of winners here.

More than 350 students from 75 countries participated in this year’s Imagine Cup held in Sydney. Next year, the annual competition moves to St Petersburg, Russia.