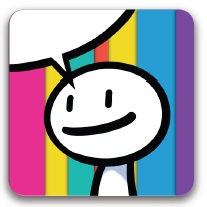 Twitter’s 140-character limit can be very restrictive and austere for some, which is why there are tweet shortening services and such. But If you’re the fun-loving sort who tweet and who’re into all things cute and Japanese-y, you may want to check this Twitter client out – Feel On! (www.feel-on.com) turns your tweets into cute and fun illustrations.

Currently available on Android (Google Play link), Feel On! essentially analyzes the tweets on your Twitter timeline and, using a “social emotion engine”, expresses them in an appropriate color and illustrations. You can tweet with a chosen illustration, upload them to picture sharing services and also share them across other social networks such as Facebook. 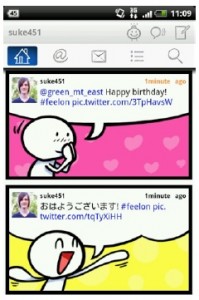 Created by Japan’s L is B Corporation (founded by Taisuke Yoko, its CEO), the app was originally released in Japan early last year and has since garnered some 250,000 users in the country. The app even won first prize in SF New Tech Japan Night held June last year in San Francisco. The company recently participated in the recent Echelon 2012 in Singapore to promote Feel On!, its newly introduced English language version, in Southeast Asia.

We’re not certain if Feel On! adds much utility to your social presences, but hey, those illustrations sure are cute.