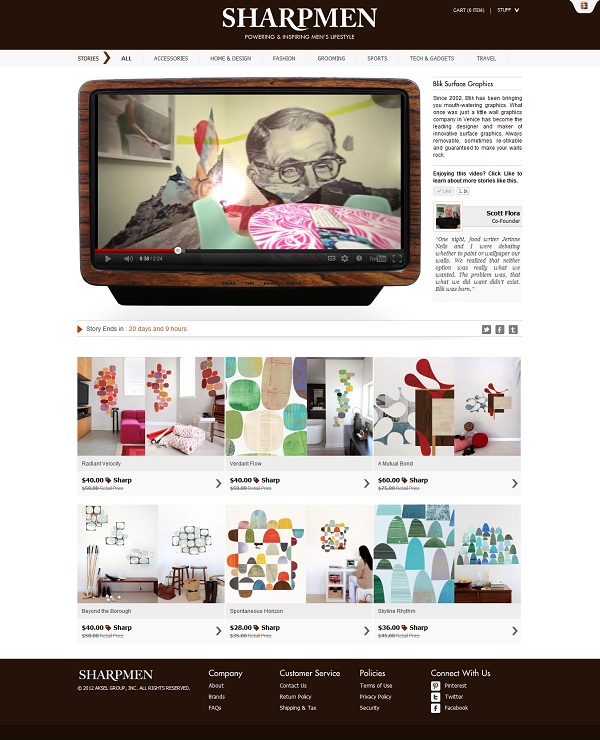 Men and fashion don’t tend to mix as well as women and fashion, but that’s not to say that men aren’t interested in fashion. While online fashion shopping sites that specifically cater to men are few and far between – Gilt Man and Mr Porter are two of the exceptions – things may be set with a new influx of fashion-related online sites targeted at men.

One of the newer offerings is Sharpmen (www.sharpmen.com), an online fashion magazine cum e-commerce site that lets men browse, shop, and buy fashion and other lifestyle items online. The site carries brands curated from a range of categories – fashion, tech, gadgets, art, accessories, design, sports gear, entertainment, food, and wine, amongst others – and items are presented via videos in flash sales and “pop-up shops” formats (somewhat similar in concept to the women-centric NMRKT). In fact, the site is positioned as a hybrid between a magazine and a shopping TV experience. “Shopping channels are great but they have traditionally been very focused on women’s interests. We wanted to create an improved video experience, online-only and 100% focused on men’s lifestyle,” says Sharpmen CEO Yazid Aksas.

Through video, Sharpmen hopes to offer a more advanced experience that allows “the designers, artists, and companies behind the various products (to be) able to visually expand on the creative process via video, bringing the consumer into their world and allowing them to feel like part of the process”. “People say that a picture speaks louder than words, well a video speaks 100 times louder than a photo,” Aksas adds.

Aksas explains that there are a myriad of great products that aren’t widely available in traditional retail channels that can be easily made available through online sites such as Sharpmen. “We want to help cool under-the-radar companies get the word out about their brand and reach our very targeted audience. Charles Alexander Neckwear is one of them, with ties made in England,” highlights Aksas.

To date, over 120 brands have signed up with Sharpmen to be featured on its site and YouTube channel.