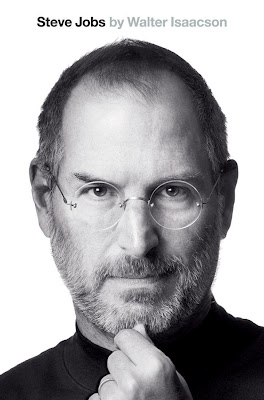 Everybody knows Steve Jobs. Icon, innovator, brilliant entrepreneur and creator of “insanely great” products, Jobs was the founder and CEO of Apple. He created fantastic products like the Macintosh computer, iPod, iTunes Store, iPhone and iPad, founded Disney beating Pixar Animations, and opened the much lauded Apple Store. Jobs’ death on 5 Oct 2011 at the age of 56 due to pancreatic cancer has been one of the most talked about death in recent history.

Written as a biography yet offering lots of business and life lessons, “Steve Jobs” by Walter Isaacson is a masterful work by the former Chairman and CEO of CNN. The only writer anointed to do the biography by Jobs himself, Isaacson paints an unadulterated portrait of who the visionary leader was from his early beginnings as an adopted kid to his last days stricken with cancer.

As I listened to hour after hour of the recording read in the clear and authoritative voice of Dylan Baker, several themes jumped out at me:

1) Steve Jobs was intensely obsessed about almost every aspect of his life. This can be seen from his vegan fruitarian diet habits, passion for all things Zen-like with simple clean designs, down to his extreme perfectionism in seeing to the minute details of every product which rolled off the Apple production line. Leaving nothing to chance, Jobs doesn’t compromise in what be believed in, sometimes to the chagrin of those who loved and cared for him.

2) Steve Jobs had an uncanny ability to influence people to do the impossible, through what is called his “reality distortion field”. Through charm, wit, compulsion, charisma, and sheer force of personality, Jobs was able to make many of his associates achieve seemingly unrealistic deadlines and scale new heights of achievement.

3) Steve Jobs was also an a**hole, especially in the way he treated others. He doesn’t mince his words and frequently used expletives in conveying his displeasure at a less than perfectly designed computer, smartphone or animated film (during his stint at Pixar). Often, it was either his way or the highway.

4) Steve Jobs’ insistence on perfection made him run contrary to many of his peers. With a defiant and petulant attitude, he insisted on Apple owning the hardware, software and services platforms, providing a seamless end-to-end solution despite this being contrary to the gargantuan open-source, transparent and platform neutral movement in the IT industry. In his own words, Jobs “screwed” players like Google and Microsoft whom he considered as being too promiscuous in allowing other manufacturers to use their software and applications.

Beyond his manic emotions and quirky character traits, Jobs provides a good study for managers and leaders alike. In a recent article on Harvard Business Review, Isaacson shared what he considered to be the real leadership lessons of Steve Jobs. These are worth nothing, and are summarized as follows:

1. Focus – Jobs’ ability to whittle down a large array of products into four SKUs which sat squarely in the quadrants of “Consumer”, “Pro”, “Desktop” and “Portable” is an epitome to how razor sharp he was in focusing on the core.

2. Simplify – This Zen-like ability stemmed from his beliefs in Eastern mysticism and spiritism, with Apple’s brochure declaring that “simplicity is the ultimate sophistication”.

3. Take Responsibility End to End – Here Jobs makes it his lifelong mission to take responsibility for the user experience, from the moment they purchase an Apple product at the store, opened the beautiful packaging, to plugging in the device and activating it.

4. When Behind, Leapfrog – Jobs doesn’t play catch up. Instead of making a better, faster or cheaper device to burn CDs or DVDs, he built an integrated system of iTunes store, iTunes and iPods which revolutionized the music industry.

5. Put Products before Profits – In the biography, Jobs wistfully regretted that he allowed a previous CEO John Sculley to milk Apple’s profits without injecting fresh innovation. When Jobs returned after being ousted, he made it his priority to shine the spotlight back on product innovation.

6. Don’t Be a Slave to Focus Groups – It has been said that Jobs doesn’t believe in any market research, quoting the famous saying from Henry Ford: “If I’d asked customers what they wanted, they would have told me, ‘A faster horse!’”

8. Impute – This lesson was one which Jobs picked up from Mark Markkula. It directed the need for subtle semiotic features like the recessed handle in iMacs which conveyed a playful and portable sensibility rather than real utility. Similarly, when you “open the box of an iPhone or iPad, we want that tactile experience to set the tone for how you perceive the product,” Jobs said.

9. Push for Perfection – I think this lesson is quite clearly conveyed in his endless need to ensure that everything falls into place.

10. Tolerate only “A” Players – Steve Jobs only wanted top grade players and would not tolerate having any “bozos” on the team. This tough love meant that you either win over his affection or was fired due to incompetence – there was no two ways about it.

11. Engage Face-to-Face – Despite running one of the world’s most valuable technology company, Jobs believed in physically meeting people and talking to them shunning the interactions on online platforms like email or an “iChat”.

12. Know Both the Big Picture and Details – This ability to zoom in and zoom out makes Jobs attentive to both the grand dream as well as the nuts and screws that held each product together.

13. Combine the Humanities to the Sciences – With a poetic and artistic soul and a technologist’s fascination with science, Jobs was atypical in his field. His ability to merge both disciplines made Apple succeed beyond what its competitors were capable of doing.

14. Stay Hungry, Stay Foolish – This famous saying that Jobs appropriated reflected his own mantra as a counter-culture rebel with an anti-authoritarian streak. Unlike many of his peers, Jobs did not subscribe to the status quo, believing that he was still a hacker and a hippie at heart even when Apple was a multi-billion dollar company.

Let me end by paying homage to Steve Jobs’ marketing genius as seen from the text which he wrote for a “Think Different” ad:

Here’s to the crazy ones. The misfits. The rebels. The troublemakers. The round pegs in the square holes. While some see them as the crazy ones, we see genius. Because the people who are crazy enough to think they can change the world are the ones who do.