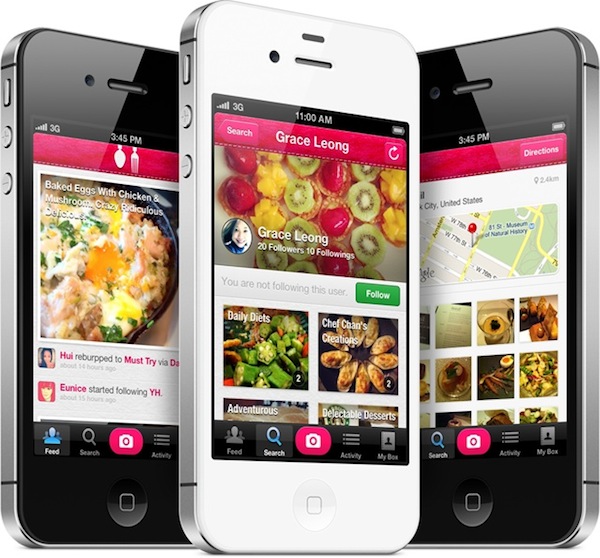 Social food journal Burpple officially launched earlier this week: the iOS application – currently available on the App Store for free – is positioned as a way to remember, organize and explore your food moments with friends on the mobile phone.

But if Singapore-based Burpple sounds similar to Foodspotting, it does. Both mobile applications lets you share food photos with your online networks, but work somewhat differently. I’d describe it this way – if Foodspotting can be described as an Instagram for food pictures, Burpple would be Path. Even Burpple‘s user interface – even down to the timeline feature – looks similar to the latter. One potentially winning feature? While like Foodspotting you can snap and upload a picture of your meal, with Burpple you can also pick an existing photo from your mobile phone’s photo library, and the application automatically remembers the date when you had it. All you need to do is to tag the location retrospectively (Foodspotting requires you to be on location to make the entry).

The idea for Burpple came about in late 2010 in Silicon Valley, but co-founders Elisha Ong and Dixon Chan would only incorporate the company in Singapore end 2011. Incubated at Plug-in@Blk 71 managed by NUS Enterprise, the startup later received seed funding of S$50,000 through SPRING Singapore‘s Young Entrepreneurs Scheme (now known as ACE Startups). Various successful publicity efforts – amongst others a HelpKopiGoOverseas.com social media campaign promoting local coffee, as well as being promoted during Savour Singapore 2012, a large-scale gourmet event – helped propel awareness of its mobile app, then in beta.

“Burpple bridges food cultures around the world and people enjoy communicating over food. Burrple is experiencing something very similar to global social networks like Instagram and Pinterest which transcends cultures and geographical boundaries,” says Elisha Ong, co-founder at Burpple. Fellow co-founder Dixon Chan believes that the application taps on existing consumer habit of taking a picture of their meal before digging in. “One in four smartphone users in the world take pictures of their meals everyday,” Chan points out. “These photos that would potentially tell great gastronomical adventures are often left dormant in our smartphones or get drowned out on generic social media. Burpple aims to solve that.”

The key advantage for the founders, of course, is being based in Singapore. If Burpple cannot take off in a food-crazy nation that has the highest smartphone penetration in the world at 54%, it’s unlikely to anywhere else.