by Pekka A. Viljakainen, author of “No Fear: Business Leadership for the Digital Age“

In 1998, I sold part of my company (which I had founded in 1986, when I was 13) to the Finnish IT services firm Tieto. Two years later we made it a full merger, and I joined the Tieto management team.

I was used to managing 200 Finnish nerds, with whom my straight-ahead approach (my nickname is “Bulldozer”) got great results. But Tieto was growing rapidly and going global. Before long I was managing thousands of nerds in Russia, China, Germany, the U.S., and other countries. And it wasn’t working. Tieto gave managers a leadership score (formal name: Leadership Index/VCC Value Creation Capital) every year, based on surveys of the people who worked for and with them. The best score was 100; I had started out, in 1998, in the 90s. By 2002, I was down to 54. A year later, not long after Tieto’s leadership (myself included) decided that anyone with a leadership score under 25 should be fired, I got a 27.

It was a true leadership nightmare. Despite my years of experience, monetary success, and the fact that I had not changed a thing in my daily executive routine, I was lost. To figure out what had gone wrong, I traveled around the world and met with my employees, usually in hotel meeting rooms. “What the heck is wrong with my leadership?” I asked them. The answers varied a lot between countries. With people in China, whatever I asked, they said, “Yes sir.” But there were some common themes:

They said they expected to have influence on company leadership. They wanted somebody who owns the game, but they wanted influence, too.

They really expected that everybody in the company would be treated equally. Of course there will be salary differences, but the way people have impact should be same everywhere — and the opportunity to share in the value of that impact should be the same, too.

One thing they said that was surprising to me was that they expected the board to be really on the ball as to what was going on in the company. They couldn’t understand how somebody could decide on a strategy without knowing specifically what to do.

So I changed how I did things. I began to arrange company events and announcements to be made in Beijing or Moscow, with headquarters in Helsinki joining in only later. I changed my time allocation to spend 80% of my time on the front line with customers and employees. It was not very environmentally friendly, because I was living 260 days a year in a jet.

I also started actively, some would say overactively, using digital videos, webcasts, and an internal blog to make sure everybody around the world knew what I was doing, and to get feedback. My blog was called Bulldozer’s Blog. I had a policy of posting everything that I had that was related to the business on it, as soon as I had it. Not pending contracts or other things that had to remain secret, but when I was working on draft presentation I was putting it in the blog.

Bulldozer’s Blog was not about broadcasting information. It became more like a Wiki than a blog. Other people in the company began commenting on it, adding additional materials. Five thousand colleagues per week were downloading material from it. They were not going because it was mandatory, but because they saw the value. The interaction was the most valuable part of it. Also, the mistakes. Everybody loves to see mistakes, especially when a leader makes public mistakes. If there are no mistakes, no failures, it doesn’t work. It’s not social media.

When I retired from the company in 2010, my leadership score was back above 90. More importantly, I had learned that leading a global team of what I call “digital cowboys” is not about command and control but about listening and communicating — and about learning, which I am still trying to do.

This post was first posted on Harvard Business Review blog and is part of the HBR Insight Center, The Next Generation of Global Leaders. You can also read an interview with Viljakainen here. 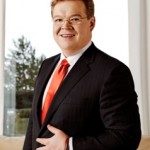 Pekka A. Viljakainen is former executive vice president of Tieto and co-author of “No Fear: Business Leadership for the Digital Age“.