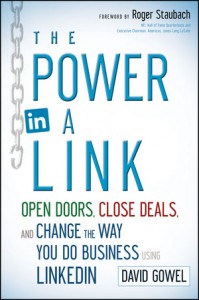 Go to your Facebook, pick any friend and take a look at their friend list. Other than mutual friends, most of the other second-degree connections – unless they’re cute! – have little or no meaning to you. Now try again, except on LinkedIn. If you’re like most professionals, you’ll have far less connections on this online network compared to Facebook, but those second- and even third-degree links suddenly look a lot more useful.

Moral of the story? It’s not about the number of connections that you have, but the true power of your network is the utility that you derive from it. This is also the premise of David Gowel’s book “The Power in a Link: Open Doors, Close Deals, and Change the Way You Do Business Using LinkedIn“. Gowel – whom the Boston Globe once called a “LinkedIn Jedi” – is a former U.S. Army Ranger who now runs RockTech, a software company that trains professionals to quickly adopt and leverage new technologies such as LinkedIn.

In “The Power in a Link“, Gowel argues that most people are using LinkedIn wrongly – because they look upon and use the world’s largest professional online network as social media, instead of the business intelligence tool that it really is. He explains:

LinkedIn is more of a social business intelligence tool than it is social media because media indicates mass projection of communications, which is not how LinkedIn is most effective for professionals… A fundamental distinction between LinkedIn and any social media site lies within the relationship information you can get from LinkedIn that you cannot get anywhere else in online or offline sources.

Instead, Gowel recommends various strategies to help you grow your  network – in terms of quality, not quantity – and achieve your desired outcomes, whether it is to find and connect to the right people, landing a new (and better) job, or secure deals for your business. There are tips and tricks to position your personal LinkedIn profile, and you’ll learn how to use some of LinkedIn‘s more advanced features such as Advanced People Search or Advanced Company Search. Interspersed within the chapters, Gowel shares his personal experiences from his past life as an Army Ranger, which makes for fun (yet relevant) reading.

“The Power in a Link” is partly conceptual, partly autobiographical, and partly technical, but it is essential reading for any professional who wants to learn how to build a better LinkedIn profile. And that reminds me – it’s time to give my own LinkedIn profile a makeover.